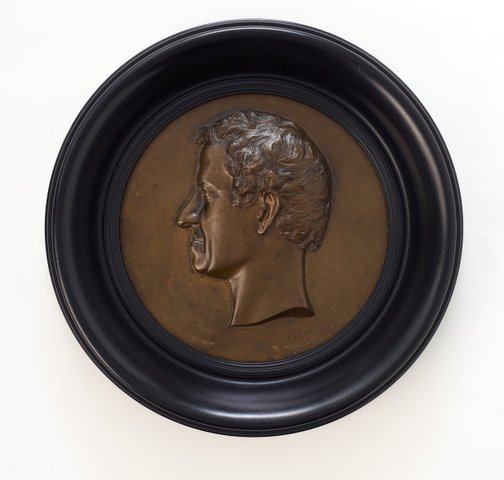 Thomas Woolner was born in Suffolk, England. He undertook early training at the studio of sculptor William Behnes where he worked for six years. In 1842 he gained admission as a student at the Royal Academy and received some minor commissions. In the next decade he exhibited works regularly at the academy, including his bronze figure of Puck.

In 1847 Woolner met Dante Gabrielle Rossetti and became an original member of the Pre-Raphaelite Brotherhood and contributed poems to its journal, 'The Germ'. After receiving few commissions, Woolner decided to visit the Australian gold diggings to try and earn some money. Arriving in Melbourne in 1852 Woolner went to the diggings in the Ovens Valley and in the Fryer's Creek, Castlemaine and Sandhurst areas. Woolner had some luck, finding gold, but after six months sold his tools and returned to Melbourne where he resumed his sculptural practice.

It was through his connection to and patronage of Lieutenant-Governor Charles La Trobe that Woolner received various portrait commissions of prominent colonial figures including one from La Trobe himself.

Woolner’s portrait of La Trobe reveals his attention to a sculptural expression of naturalistic form. While composed in the format of a neo-classical profile, the modelling of the subject’s features are infused with the softened guise of humanity. La Trobe is imaged with a sense of alertness, and a gaze that extends beyond the confines of the portrait form.

Woolner then spent six months in Sydney before he returned to England in 1854. He became one of the leading sculptors of the Victorian age, a professor at the Royal Academy and a successful poet. Woolner never returned to Australia but completed a number of Australian commissions throughout the 1860s and 1870s.

Gift of the Penglase family 2017. Donated through the Australian Government’s Cultural Gifts Program

Browse other works by Thomas Woolner 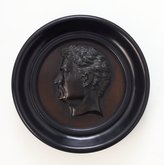 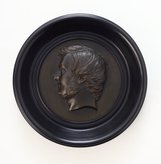