Come find me when I'm hiding 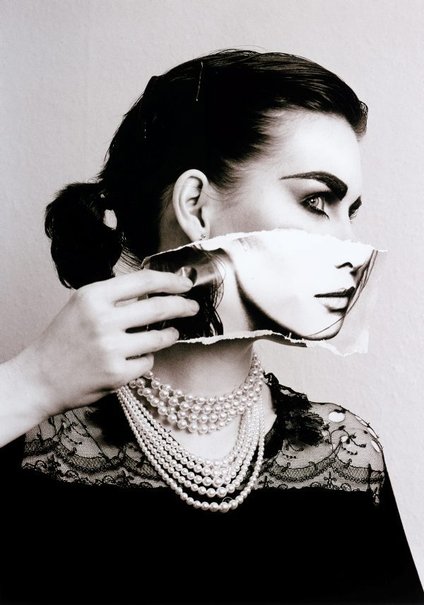 Linder’s photomontage works are assertively political. With an economy of expression and a graphic intensity, she combines image fragments into collaged statements that are abrupt and succinct. Much of her practice revolves around countering prescriptive gender norms and exposing the frequent commodification of the female body as both farcical and subliminally horrific.

Her aesthetic sensibility and activist impulse is inextricably linked to involvement in the Manchester punk and post-punk scene of the 1970s. Her work was bound up in the pictorial vernacular of the subculture itself, and to this day her most recognisable work is the cover she designed for the Buzzcocks album Orgasm addict in 1977. The collaged cover features a naked woman appears with an iron for a head and lip-sticked mouths covering her nipples. In this iconic work, as with many others, Linder has silenced her subject. Severed from the head and sutured onto the breast, lips become a mouthpiece for sex, not a conduit for speech. In the proposed work, the subject’s voice has also been compromised. An image of the lower portion of a woman’s face has been crudely ripped from a magazine and is being held in front of another model’s own face as a speechless surrogate. Inert and in-expressive, these pictorial lips become a mask and a muzzle.

Even as it cites the stylistic codes of high fashion photography, rather than the makeshift and DIY character of punk’s visual coding, this photograph personifies the core principles of the punk ethos. More than any other cultural phenomenon, punk recognised and amplified the political possibilities of the voice. Unsettling the hierarchies that demarcate the vocal and visible from the voiceless, particularly in relation to class, punk rejected and reset the narrative of comfortable conformity. Alerting us to the mechanisms of an entrenched patriarchy – reliant as it is on the voicelessness of women – Linder performs the same feat.

Gift of Geoff Ainsworth AM 2018. Donated through the Australian Government’s Cultural Gifts Program