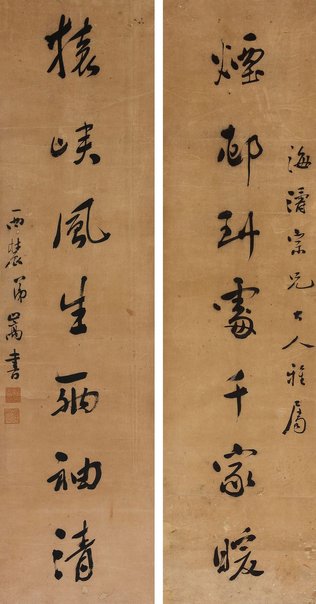 ‘Smoke-veiled village, the warm air shadows thousands of houses;
Monkey-roared gorges, the sleeves are swaying with a gust of wind.’
Inscription and signature: For Mr Haitao as he requested, written by Song, alias Xi’nong.

At first glance, the couplet represents a sweet pastoral landscape. The image in the second line, however, may suggest a deeper reading: in Chinese literature ‘sleeves swayed with a gust of wind’ alludes to the expression of a white-handed official free from corruption and bribery (the long and wide sleeves of a mandarin could serve as the best receptacle to drop money or valuables in). With such an overtone the couplet would be a meaningful motto for an official scholar.

Nothing is known of the life of Liang Song.