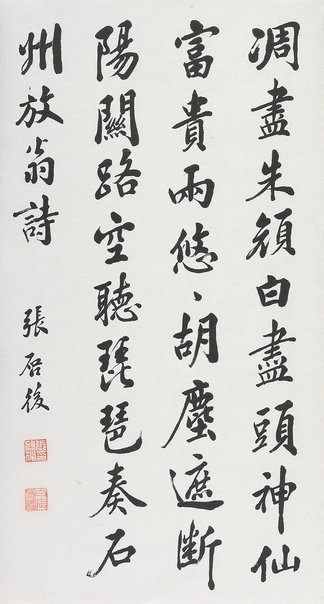 ‘The rosy cheek is faded, and the hair has turned grey,
Immortality and wealth remain a remote dream.
Mounted Tartars have blocked the Yang Pass with dust,
One just helplessly listens to a pipa lute lamenting on Shizhou.’
Inscription and signature: A poem by Fangweng [Lu You]. Zhang Qihou.

Two years before Lu You was born, the Jurchens (a Tungus ethnic group inhabiting parts of Manchuria) overran most of North China in 1126 and established the Jin dynasty. The Song court retreated to the south to re-establish the Southern Song in present-day Hangzhou. Throughout his life, Lu You held a patriotic stance, advocating the expulsion of the Jurchen from northern China. This was the cause of his pain and source of his poetic inspiration. The poem was written when he was between 60 and 70 years old, during two decades of retirement at his birthplace, Shaoxing. Entitled ‘Gazing into a mirror’, it is a lament on the delusions of this life and the division of his country (Shizhou is a city in the north).

Zhang Qihou (alias Yanchang, style name Ruoceng), a native of Sizhou in Anhui, was the 'chuanlu' (first in the second class) of ‘jinshi’ in the last imperial civil service examination of 1904. Since there were only three recipients of the degree in the first class, ‘chuanlu’ naturally assumed the fourth on the list. When grouped with the work of the other three ‘jinshi’ degree holders, his calligraphy is in high demand. Zhang’s last years were spent in retirement in Shanghai, supporting himself by selling calligraphy and writing articles. In this work, he used a very absorbent paper and a brush well loaded with ink, thus revealing the subtleties of ink density on the absorbent surface of paper.