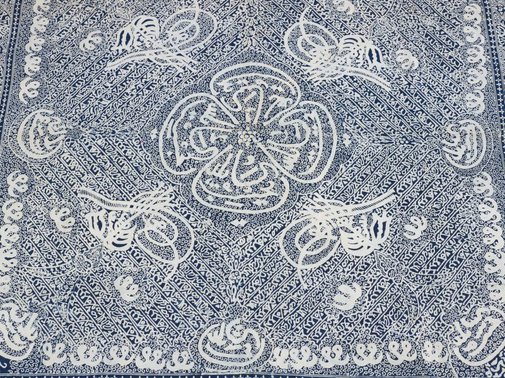 According to Michael Rogers, Honorary Curator of the Nasser D. Khalili Collection, the head cloth shows four tughras arranged around a central flower-like pattern. A tughra is a device used to authenticate Ottoman state documents and consists of the name of a Sultan, his patronymic, and the formula 'May he ever be victorious'. Rogers identified the tughras on this cloth to be reversed versions of the signs of Abdul Hamid II (1876-1918), the 34th Sultan of the Ottoman Empire (This means they would be read clearly from the reverse side of the cloth). That the sultan's tughra appears on a Southeast Asian textile is not altogether surprising as Hamid II is known to have travelled to Indonesia and to have set up an Islamic institution in Aceh.