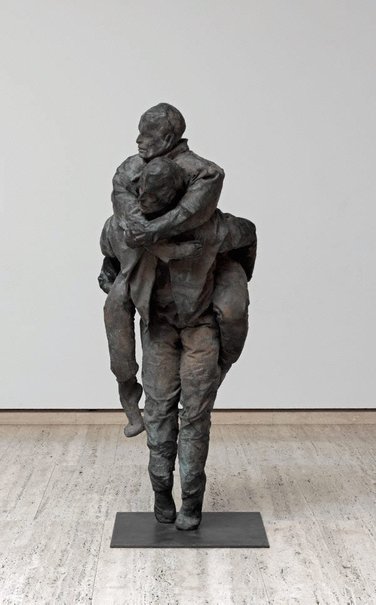 Juan Muñoz was one of the few figurative sculptors whose work uncompromisingly explored the history of the body in art through contemporary philosophical ideas and with a remarkably individual vision.

This figure composition is part of a series, which follows on from groups of figures made to resemble those rocking toys, which always come back upright however hard you push them over. These life size dolls had their eyes propped open lending a degree of horror to the apparently playful forms.

In reproduction the piggy back figures look as if their skin has been burned, scarred or melted. While this is still a possible response, the peculiar quality of the surface of the objects is remarkably similar to calcified objects from a limestone cave. Not the paraphernalia of the ex-votos at Lourdes but the oddly figurative forms of some stalagmites, which have been polished by the hands of countless visitors to the cave. In the fibreglass versions this effect is amplified by the colour and patination.

While this may be a purely subjective response the impact of such a reading is impossible to set aside once it is uttered. In some examples the figures are caught in animated conversation yet fossilised like the figures from Pompeii or like revellers who have been interrupted by Medusa and turned instantly to stone.

There is also a theme of doubling, which recurs in the work. The piggy back figures seem like doubled identities while the conversations and the couples seem to be aspects of the same person, not exactly a self portrait but something like.