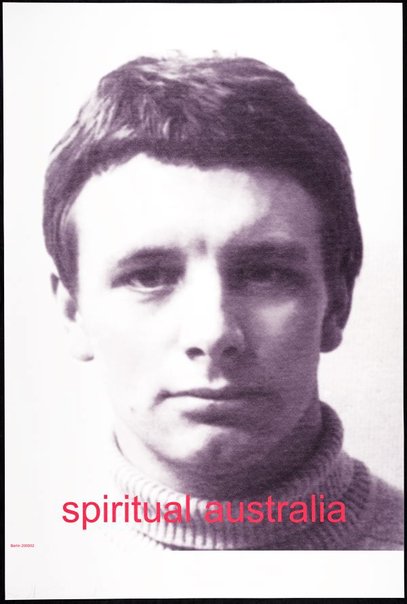 Scott Redford's layered body of work embodies a synthesis of regionalism, identity, abstraction and pop culture. Growing up on the Gold Coast and living in Brisbane, Redford has remained resolutely committed to the iconography of his region: surfboards, motorbikes, palms trees and high rise apartment blocks appear regularly. His interest in subcultural identities feeds into this iconography and surfers, bikers or men who may or may not desire other men also inhabit his imagery.

'Spiritual Australia #1' features a photograph of Australian artist Robert Hunter appropriated from the catalogue for the The Field exhibition, held in 1968 at the National Gallery of Victoria and the Art Gallery of New South Wales. This important exhibition featured artists working with hard edge abstraction, seen as a contemporary international style but one which was most artists moved away from soon after the exhibition. Hunter however has adhered to minimal hard edge painting throughout his working life. Redford has said about this work, "... those great shots in The Field where the artists look like ANZAC soldiers or footballers... that piece was about Australia, about being homesick - it was made in Berlin." (Bricks are heavy, IMA. Brisbane, p 73). Redford makes reference here to the connection often made between abstract art and spiritualism, and also to an artist who is perhaps one of his heroes.