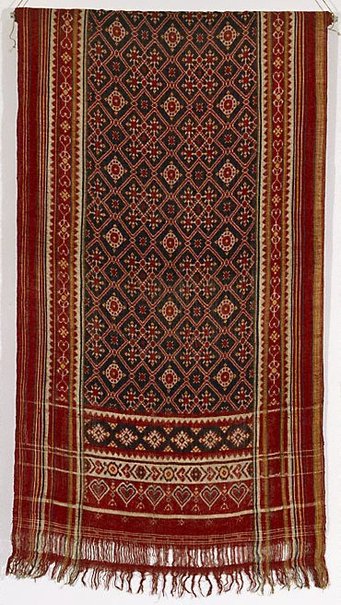 It is believed that the 'patolu', an intricate style of double-'ikat' cloth, was being made in India from as early as the 13th century. The central field, border designs and colouring of this ‘patolu’ is typically Indian with a complex geometric design of embellished crosses, roundel and eight-pointed star motifs in red, white and yellow on a black ground. It has been woven into a 'selendang' or shoulder cloth, indicating that it had been made specifically for the Indonesian market. The intricacy and complexity of the five-colour 'patola' patterns were highly sought after throughout Southeast Asia, and particularly in Indonesia, where textiles were a recognised means of storing wealth and had an exchange value. Textiles were also important as gifts to consolidate relations and allegiances and were an integral part of diplomatic and court protocol and in this context 'patola' cloths were a highly valued, highly sought after and much copied textile.

made for the Indonesian market