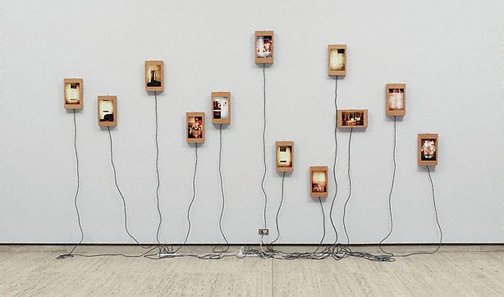 During the 1990s John Barbour made a series of installations of humble architectural propositions, small objects reminiscent of housing and shelter that ask for an intimate regard of space and form. More recently he has exhibited a series of delicate, stained fabric panels embroidered with texts such as ‘Pure Joy’ which extend his consideration of basic human needs and emotions. ‘Sisters of Charity (untitled objects)’ was created between 1993 and 1997 and consists of 12 modestly scaled and realised light boxes with a series of images of interiors which are empty of human life. Many of these interiors appear institutional and also quite abject, spaces which provide a roof over your head, warmth and shelter but not much more. The empty rooms are both eloquent and enigmatic. They resonate with expectation: it is as if they bear the traces of past actions and inhabitants as well as the premonition of what might next unfold.

The title ‘Sisters of Charity’ refers to the name of the religious order responsible for the Melbourne hospice where Barbour worked for several years during the 1980s and where some of the photo-graphs were taken. Each of these spaces has meaning for the artist, yet for the viewer they are devoid of personal association and therefore appear like snapshots from a journal, in which photographs of personally significant incidents and locations have been stripped of their context and content. As Barbour has said, he wants to ‘represent subjectivity as a series of knowable facts’.1 These plain wooden boxes draw us into an intimate and personal encounter with dreamlike interiors suggestive of hard times and lives unravelling. Coupled with the small glowing lightboxes, the muted hues of the photographic surface are enticing and we step closer to read each image. We consider the spaces, the empty beds, the windows and we wonder.

Barbour’s humble installation conceptually addresses ‘ordinary human needs and fears’. With adroit and considered simplicity, he explores the relationship between subjective experience and objective reality – between perception and actuality – amid what we believe we see and what could have or did happen. Inevitably we consider, what if we had need of these institutional spaces, what in our lives could lead us to inhabit these rooms? In discussing his recent embroideries, Barbour uses the term ‘un-made object’, a variation on Marcel Duchamp’s ‘readymade’. Whereas the readymade already had a life prior to being art (being manufactured and created for a specific purpose before being recontextualised within the art gallery), the un-made object has no previous life which could be termed successful and yet neither does it appear to have been wholly created by the artist as an art object. It is stuttering, stained, incomplete – the product of an un-made man, a man coming undone, rather than that object of veneration in the West, the self-made man.2

1. This and subsequent quotes are from email notes to the author, 26 Nov 2004
2. For a discussion of the un-made in relation to Barbour’s work see Michael Newall, ‘The un-made’, in ‘Public/private: the second Auckland Triennial’, Auckland Art Gallery, Auckland 2004, pp 27–30

Browse other works by John Barbour