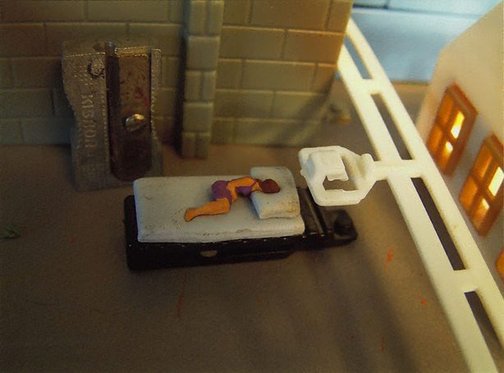 Campaner has written extensively on her work:
"'Internment' images physical and psychological spaces suggestive of the relationship between institutional power and personal vulnerability. The constructed nature of my photographs is also a recognition that we don’t believe in photographs anymore. In a time when images are censored and manipulated in the interests of commercial and state power, I am interested in the idea that perhaps the closest image to reality we may ever experience is a construct of what we suspect but are not allowed to see for ourselves…. The closest an asylum seeker or political prisoner might come to be given a face is through portrayal by a small mass produced figure."

Campaner studied architecture at Sydney University (1989-1994) before studying painting at Sydney College of the Arts (1997-1999). Her work was exhibited in 'Home sweet home: works from the Peter Fay collection', National Gallery of Australia and touring (2003-) and she has been collected by the National Gallery of Australia, Canberra, the University of Wollongong and others.

Purchased with funds provided by the Photography Collection Benefactors' Program

Browse other works by Elaine Campaner