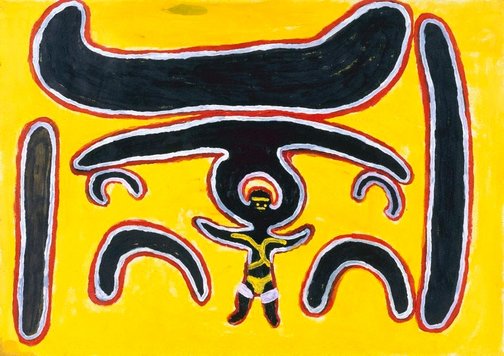 A Wangkajunga ceremonial leader, dancer and visual artist, Nyirlpirr Spider Snell is one of the few remaining elders born at Yurramaral, an important permanent waterhole on the south-eastern side of the Canning Stock Route in the Great Sandy Desert. As a young man, Spider developed skills as a stockman, handling horses and cattle on Christmas Creek Station. His true apprenticeship began before that, however, when three senior men taught him the key dance ceremonies that he still performs today. In 1998, Spider danced on the Ngurrara canvas in Canberra. This giant painting resulted from the collaboration of 50 artists and claimants over two weeks, and was made in support of the Ngurrara group's Native Title claim.

As a key custodian, Spider communicates with his ancestors through Kurtal, the Snake Spirit, who lives in a sacred waterhole. In the old days, this jila (spring) provided the only reliable source of water in all seasons. Water in the desert means life, and Kurtal is a 'living water' as well as the moral protector of landuse rights for the people in the area.

Kurtal is present, living in the water. Kurtal's story cycle includes his journey as a man, travelling south-west and south-east through the region. Kurtal and other ancestors moved all through the desert country, coming to rest in a number of different key sites. Through ceremony and song, the Wangkajunga elders make rain by interacting with Kurtal.

The acrylic painting, 'Kurtal', 1996, is a self-portrait of Spider dancing the Kurtal ceremony. The figure wears the long black
rain cloud called kutukutu as a headdress, accompanied by other black clouds outlined in white and red. These wilarn
(horse-shoe shaped clouds) can appear in a clear blue sky to signal the approach of rain. The kutukutu is the first rain that
follows the wilarn, and can be a fierce rainstorm. Works by Spider's brother, the late Jarinyanu David Downs, also depict
this subject matter.

Spider makes kutukutu headdresses for performances from human hair, grass string and wool. Over the last few years, he has been passing on his knowledge of these important dances to his grandchildren.