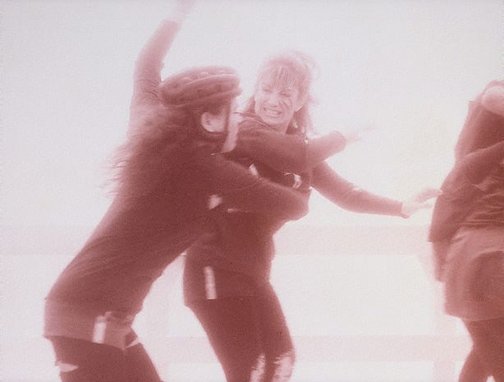 'Guapa (Goodlooking)' 1995 is a series of 10 images which were executed when the artist was in residence at ArtPace in Texas in 1995. The series continues Moffatt’s concerns in that she operates as a director and picture maker, rather than picture taker. 'Guapa', like previous series, is about the influence of popular culture, in this case the American roller derby which was televised around the world some decades ago. Moffatt hired local models and posed them in the studio in order to recreate the effect of theatre and violence inherent in sport. That the players are women who are violent is also important. The beauty and heroism is enhanced by printing black & white negatives onto colour photographic paper - the bleached backgrounds and the magenta tints give the work a dreamy quality. The memory of watching black and white television is further enhanced by the flat back frames which should accompany these prints.

As Frances Colpitt has written in the ArtPace catalogue, "In its deception, Moffatt's work is about role-playing, and its effects on identity and autobiography. Deriving from personal experiences and memories, its scope is universal: we all play roles most of our lives".