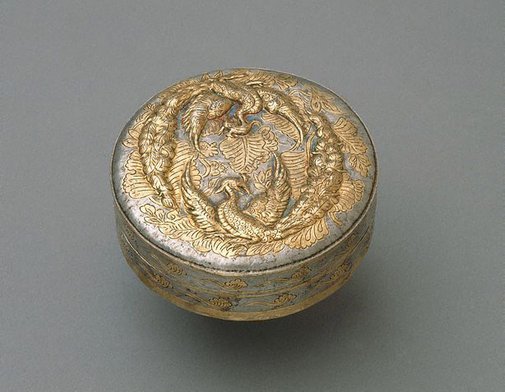 Although silverwork has a long history in China, the Tang dynasty is generally recognised as the period when the finest silverware was produced. The Liao dynasty was one of several periods of barbarian rule in China. At this time the Qidan Tartars gained control of much territory in the north of Tang China, and like other invaders, infused Chinese culture with their own. Two decorative styles of Liao silverware can be distinguished: the first proclaims a taste quite alien to the Chinese, with decoration in a manner distinct from the Tang tradition of central China; the other style is based on sophisticated Chinese models. This silver box, with the phoenixes in repoussé amid formalised foliage and the traced floral and cloud-scroll decoration, is much in the style of the Tang and Song periods, and exemplifies the continuation of Chinese taste into the late Liao period. Inside, the bottom of the box is engraved with an inscription which reads: 'In the 'bingyin' year of Taiping reign [corresponding to 1026 CE], a box of ambergris and jujube [?] is presented as a tribute to the Wenzhongwang fu [Mansion of the Cultivated and Loyal Marquis]. Seventy nine [?]'

According to 'Liaoshi' (history of the Liao dynasty), the name associated with the Wenzhongwang was that of Han Derang (941-1011), a Chinese administrator and military commander under two Liao emperors. His brilliant career brought him high rank and honourable titles. Upon his death in 1011 he was given the title Wenzhong (Cultivated and Loyal).

Although a number of refined Liao silverworks were unearthed recently from a broad area across Inner-Mongolia, Liaoning, Jilin and Hebei, it is rare to find silverwork bearing both a date and an inscription for tribute. The significance of the silver box is therefore twofold: first, the piece can be used as a reference in dating other Liao silverwork; secondly, it provides a material document in the study of the tribute-system of the Liao period.