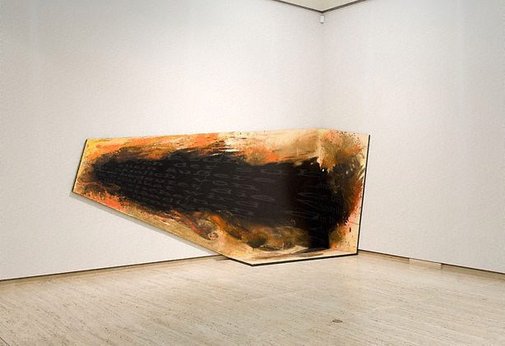 Merilyn Fairskye’s work in the 1980s considered how art participated in constructing experiences of gender and power, particularly the ways in which images, materials, optics and space interact with the viewer. ‘Natural science/triptych corner: alchemy’ was originally exhibited with two other paintings of a similar construction in a single room, with each painting installed in a corner. When viewed directly front on, the viewing position that traditional perspective requires, the paintings appeared as abstract distorted shapes with both text and images indecipherable. However when the viewer moved to a particular point to one side of each painting, they resolved into recognisable images and forms. This type of distorted perspective, which becomes a readable image from a specific, usually oblique, angle, is known as anamorphosis. It is a perspectival trick used since the Renaissance, perhaps most famously in Holbein’s double portrait ‘The ambassadors’ of 1533.

While each painting could be deciphered by moving to the required viewing position, it is important that at no point could all three be simultaneously legible. The association of traditional perspective with an a ‘priori’ masculine viewing position, directly in front of a painting whereby the subject matter reveals itself clearly to the gaze, was interrupted by placing the viewer ‘beside themselves’ to view these images and by refusing to allow all the images to become clear at once. The exploration of how art participated in constructing gendered space and subjectivities was an important development in postmodern feminism. Anamorphosis as a device that utilised perspective and disrupted it simultaneously was explored by a number of artists at this time, including Mike Parr. An interest in anamorphosis was sparked by the writings of French philosopher and psychoanalyst Jacques Lacan, who used the example of ‘The ambassadors’ to suggest some of the complexity of the shaping and experience of self and gender positions.

‘Natural science/triptych corner: alchemy’ is an exemplar of many of the traits associated with post-modernism. Apart from its exploration of gendered space, subjectivity and perspective, it also contains passages of text and appropriated images. The title of the series refers to the writings of German philosopher Immanuel Kant, and the text in this particular work is from Kant’s theories on space. Fairskye’s work is a response to the association of science and reason as masculine and nature and the irrational as feminine, as well as to Kant’s fixed ideas on space. The image is from the body and fire paintings created by French artist Yves Klein in 1961 by burning the surface of canvases on which nude models had left an imprint of their moistened bodies. Alchemy itself is the wonderfully irrational medieval science that aimed to transform base metal into gold and to find an elixir that would enable us to live forever; it is an image of fabulous if improbable transmutation.

Browse other works by Merilyn Fairskye