I am still what I meant to be 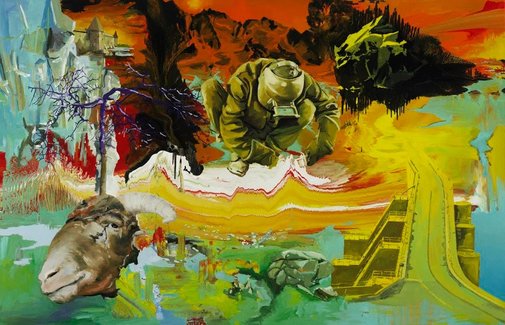 In recent years Stephen Bush has combined abstract areas of paint poured onto the canvas with realist imagery in high-keyed pop colours, such as the bright orange and strong blue/greens in this work. The poured paint seems to have formed a sublime landscape in the background or even geographic strata in the centre of the canvas, and yet it is just poured paint with no distinctive landscape features and is dependent for recognition on an imaginative projection on the part of the viewer.

Imagination and suggestion is important to Bush as well. He pours the background paint onto the canvas first before developing the figurative elements from the images suggested to him as the paint pools and dries. In the right foreground of this painting a dam straddles a lake-like area of blue, forming a bridge to a possible bush-clad headland which is again a pool of paint but over painted with snow drifts. In the centre of the painting is a welder, completely covered in protective clothing, a figure that recalls the apiarists that have appeared in many of his other works. This figure is intently on working on the strata of paint beneath him and could be a stand in for the artist himself and the labour of making a painting.

In the left foreground is a large severed goat’s head, a figure that seems significant. The goat is an image Bush has been interested in for some time as it is a common symbol in many cultures. Bush also acknowledges the use of “goat” used flippantly is colloquial western language. A severed head speaks of religious overtones, though this is not necessarily Bush’s intention; rather, there is interest in the expanse of possible interpretations of this subject.

Stephen Bush
I am still what I meant to be

Browse other works by Stephen Bush 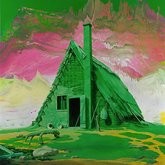