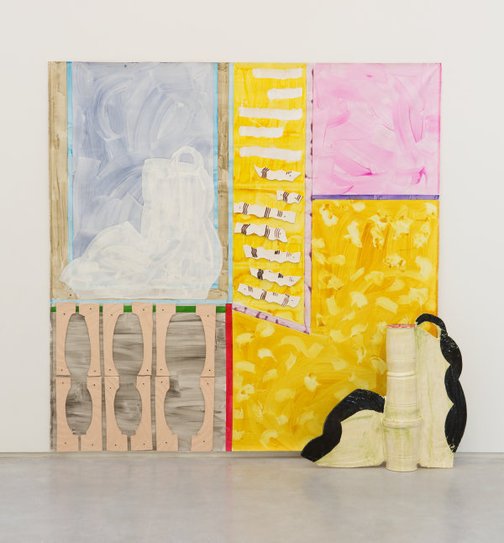 The art of Betty Woodman inhabits a world of everyday pleasures. Associated with the pattern and decoration movement of the mid 1970s, Woodman long argued for the place of ceramics in contemporary art and is highly regarded by a younger generation of artists working in the medium today. She has been the subject of major survey exhibitions at institutions as unlike each other as The Metropolitan in New York (2006) and the Institute of Contemporary Art in London (2016).

Woodman’s hybrid ceramic-paintings engage with the modern tradition of the domestic interior as a conditional paradise and as a frame for experiments in colour. In 'The yellow room' forms migrate freely between ‘craft’ (represented by the ceramic vessel) and 'art' (represented by the painting), with no precedence or higher value granted to either. The jaunty silhouette of the ceramic sculpture, seen in front of the canvas, is echoed within the two-dimensional world of the painting. White-washed and ghostly, it sits on a window sill, next to which the solid ceramic ‘brushstrokes’ of an open shutter further confuse painted space and sculpted form.

As well as being characterised by a pale-yellow radiance,'The yellow room' is marked by a sense of ease and lightness in its painted surface: the traces of Woodman, during an extraordinary late-in-life creative streak, working lyrically and freely in front of it.