An old farmhouse at Hambledon, Surrey 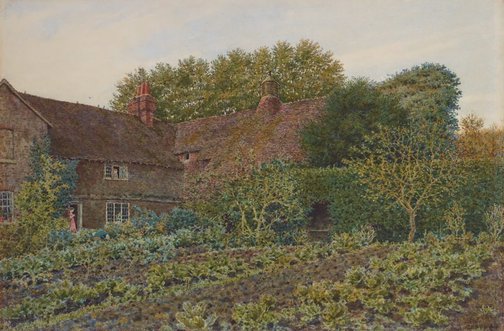 George Price Boyce was trained as an architect but around 1849 he decided to take up landscape painting. He received lessons from David Cox and not long afterwards he met Dante Gabriel Rossetti, who was to become a lifelong friend, and, a few years later, William Holman Hunt and John Everett Millais. Of independent means, he began collecting their work, while writing about them in his diaries. These serve as an important record of the Pre-Raphaelite Brotherhood’s activities. John Ruskin also took an interest in his work, and advised Boyce to visit Venice in 1854. Boyce worked mainly in watercolour, applying the Pre-Raphaelite principles of truth to nature, and his landscapes were exhibited regularly at the Old Water-Colour Society, to which he was elected an associate in 1864, and a full member in 1878.

Boyce frequently ventured out of London and into the countryside of neighbouring counties in search of congenial subject matter. He had a profound and lifelong affinity for old, timeworn buildings that bore the imprint of long habitation and coexisted happily with the natural elements of the landscape. His watercolours often feature vernacular architecture observed with unstinting fidelity and a sharp eye for detail. Art critics at the time were especially attentive to the unexpected, not to say anti-picturesque, qualities of Boyce’s compositions, and the uncommon viewpoints that he presented the spectator. In 1866 the 'Art Journal' remarked that 'Mr Boyce is singular in his choice of subjects, inasmuch as he loves to plant his sketching stool just where there is no subject. Yet does he manage to make out of the most uncompromising of materials a picture which for the most part is clever and satisfactory'. The sentiment was echoed again the following year, when the critic noted: 'He displays pictures which, as usual, please by their peculiarities. Sometimes he is sombre, often lustrous, always harmonious even in his contrasts. That he affects subjects which an ordinary artist would condemn as unpaintable, is rather in his favour.'

Our watercolour, with its uniform rows of cabbages and alternating bands of dark furrowed soil, represents an antidote to the clichéd chocolate box images of Victorian cottage gardens. Painted in a subdued palette of greens, cool greys, browns and mauve, the scene is of a sequestered kitchen garden, bound on two sides by a brick farmhouse (in fact two dissimilar buildings) and a hedge with an archway flanked by a pair of fruit trees. A few feet away from the house, a gardener in rolled up shirt sleeves is busily cultivating the soil or harvesting vegetables. This garden is a primarily utilitarian: but for the faintest note of floriferous pink beneath the window and the pair of terracotta pots glimpsed on the extreme left, the plot is devoid of ornamentation. The strongest note of colour is sounded by the female figure poised beneath the doorway. Boyce delighted in such incidental details, and his inclusion of a third figure appearing at the upstairs window, together with the flock of birds gathering on the mossy roof, adds greatly to the effect of a cosy rural existence.