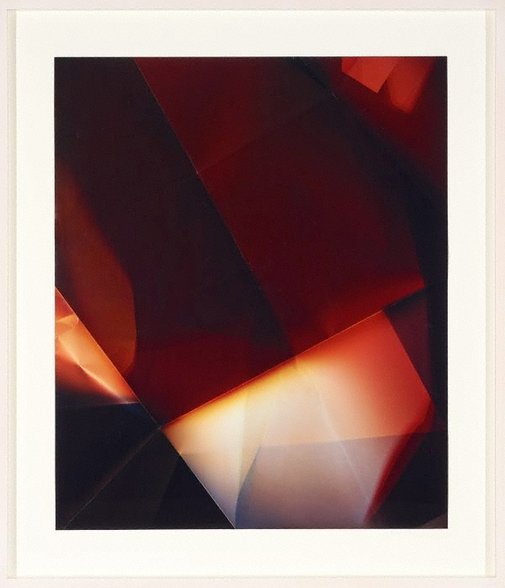 Walead Beshty, the Los Angeles-based artist and theorist, has received international attention for his camera-less photograms that extend the experimental photographic techniques pioneered by early modernist photographers such as László Moholy-Nagy and Man Ray. Beshty interrogates the nature of photographic representation and the premise of automatic image production, abandoning the pretence of photography’s decisive moment, and replacing it with a system of arbitrary rules that determine composition.

To produce this work, Beshty folded a piece of photo-sensitive paper into a 3D form in the darkroom and exposed each side to a different colour of light (yellow, blue and red, as indicated in the work’s title). Following its exposure, the paper form was unfolded and chemically processed. The residual trace of this process remains visible, with the creases transformed into a network of topographic contours that buckle the surface of the print. Unlike conventional photographs, Beshty’s prismatic photograms are not records of an absent subject or reproductions of a distant scene; their subject is the photographic process itself.

When discussing his work, Beshty insists on describing these photograms as ‘concrete’ rather than ‘abstract’ images. The concept of abstraction, according to Beshty, is predicated on a pictorial image system. For an image to become abstract, it must be abstracted away from the real. Beshty’s work abandons all pictorial systems of representation. Speaking to the convergence of material and process as elements that dictate form beyond a pictorial scheme, the term ‘concrete’ also accommodates the photogram’s status as an object. With this work, as Beshty himself notes, he is striving for ‘the possibility of a materialist photograph – one where the material of the print and the image it contained were one and the same, where the material was a generator of an image rather than merely a support for an image.’1