Made almost entirely by men, the long ceremonial wig, or 'peng kokn' in the Wahgi language of central Highlands of Papua New Guinea, is worn only during the major pig festival called 'konggar' – an extended ritual cycle held once in a generation. Over a period of years, rites are performed, pigs reared, and ceremonial structures built. During the final days of celebration the correct 'bilas' (body decoration) are displayed by men and women. These include bird of paradise and other plumes, woven armbands, gold-lipped pearlshells, string aprons, body paint and 'peng', or wigs. There are a number of types of wig made for the 'konggar', the most common being the long so-called 'judge's wig', which extends over the wearer's shoulders, such as this example.

Traditionally these were constructed from a frame of bamboo over which barkcloth was sewn, and burrs pressed onto its outer surface. Human hair was then added. The entire surface was then smeared with tree resin. Feathers, seeds, shells and beetle carapaces also adorned the wig. Today, modern materials such as cotton fabric and synthetic glue are employed. Two distinct stages of wig-making are accompanied by the killing of pigs and the enforcement of certain taboos.

Newly completed wigs are worn for the first time by men when they join others on the ceremonial ground, where dancing, or 'gol' takes place. As anthropologist Michael O'Hanlon wrote, wigs were 'promotors of pig growth on the one hand, and ... associated with sexual attractiveness on the other' (1). Occassionally wigs are passed down not only from fathers to sons, but also from fathers to unmarried daughters. O'Hanlon notes that in the 1980s, 'the number female wearers seems to be rapidly increasing'.

This 'peng kokn' was collected by Todd Barlin at the 1992 Mt Hagen Show.

© Wahgi people, under the endorsement of PIMA's 'Code of Ethics'

Browse other works by Wahgi people 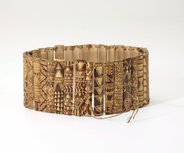