Embroidered wedding canopy (or 'chakla') with design of circular dance 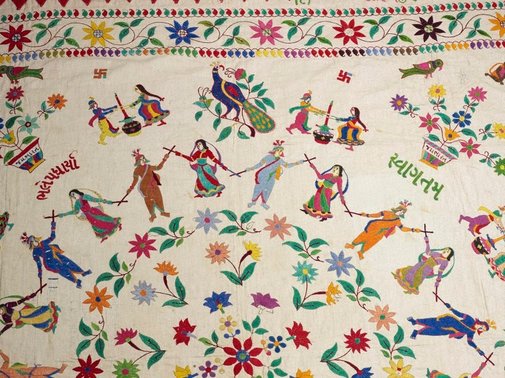 This attractive textile is a wedding canopy with an embroidered design of Krishna and the gopis placed around a central circular floral motif, doing a popular type of folk dance known as a stick ('kathi') dance. Beyond this circle is a third ring comprising peacocks at the four cardinal points, each peacock flanked on both sides by a motif of Krishna and Radha churning buttermilk. In each corner of the main field is a large flowerpot above which are two parrots and a monkey.

Throughout the canopy are scattered a number of auspicious symbols. The swastika represents the swirling sun; the circle of flowers, its shape subliminally symbolic of the sun, has connotations of auspiciousness because the flower petals have 4, 8, 12, or 16 points which are all auspicious numbers.

The Gujarati script embroidered on the canopy was identified by Gauri Krishnan, Curator of South Asian Art at the Asian Civilisations Museum, Singapore. In the outermost border (u.l) is the phrase 'Patel raghauji narsinh'..[indecipherable] which is the name of the owner ('Patel' ('headman') is a title, the rest his name). Underneath the flowerpots u.l. and l.r. is the word for 'welcome' ('swagatam'), and under the other two flowerpots is the word 'ballebadaria' which also means 'welcome'. On the flower pots themselves are the words for 'Victory to India' ('Jaya Bharat'). Because of the style of the flower pots and the 'Victory to India' script, the canopy can be interpreted as having a type of Nationalist sentiment, and thus can be dated to between the 1920s and early 1950s.

Embroidered wedding canopy (or 'chakla') with design of circular dance