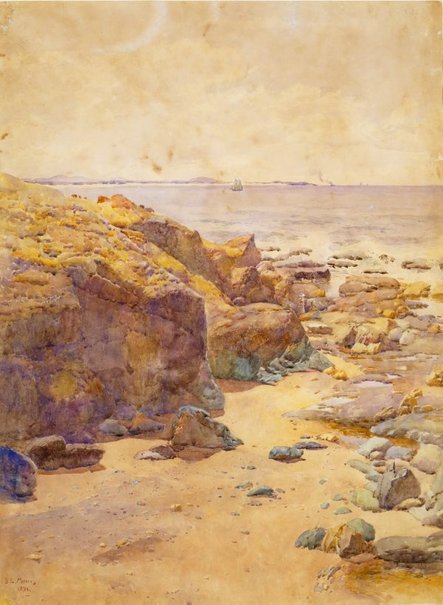 Benjamin Edwin Minns came to Sydney from Inverell, western New South Wales, as an adolescent. He shared accomodation with Charles Conder in William Street and studied under AJ Daplyn and Julian Ashton. In 1895 he travelled to London, where he lived for twenty years. During this time he worked for London 'Punch' and other magazines, including Sydney's 'Bulletin'. Minns is best known for his humorous outback drawings in the 'Bulletin' and for a remarkable series of early portraits of Aborigines, a number of which are in the Gallery's collection. Minns was much respected for his reserve. In the special 'Art in Australia' issue devoted to him in 1932, MJ McNally wrote:

'Minns expands in his praise of others, but getting him to speak of his own efforts and outlook is like attempting to start a discussion on the Bionomial Theorem with a Baby Austin.'

This watercolour shows Cresent Head in the distance, with Point Plomer in the foreground. Both are promontories on the north coast of New South Wales, just north of Port Macquarie.

Browse other works by BE Minns

BE MinnsSeason of mists and mellow fruitfulness 189128