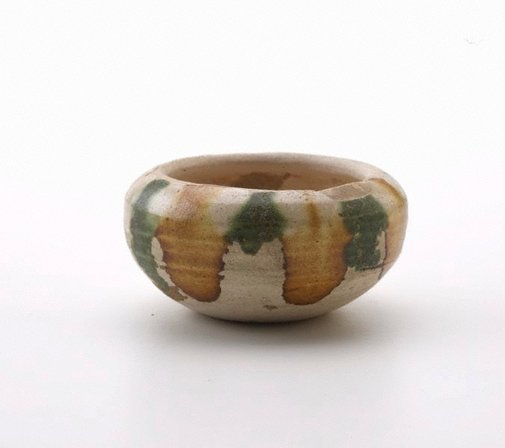 These small funerary bowls (Accession no.s 268.1975-272.1975) are decorated in the lively colours of Tang 'sancai' (three colour), for which there seems to have been such a vogue in the smart Tang capital of Changsha during the first half of the 8th century. All sorts of funerary objects, whether figurines or quasi-practical, were decorated in the polychrome style. The fashion may have been related to a vogue for imported Western textiles, colourfully tie-dyed. The colouring on these pieces is an example of Tang lead glazing. There is little indication of lead glazing in China between the end of the Han dynasty and the late 6th century. It is adopted again during the Sui dynasty when the founding of a native glass tradition saw the wide adoption of lead glazing (Watson, W., 'On T'ang soft-glazed pottery' in 'Colloquies on Art and Archaeology in Asia No.1', London, Percival David Foundation of Chinese Art. Second edition 1976 pg.42). A major difference between Han lead glaze and that of Tang is that in Han times the glaze was applied in a raw state and was thus very poisonous. In Tang the glaze material was evidently derived from a fritted form of lead, the lead having been melted down in combination with other necessary components. The visual effect of a fritted glaze is one of brightness and transparency such as does not occur in the use of raw lead (Peterson, H. (ed.), 'Chinese Jades: Archaic and Modern from the Minneapolis Institute of Arts, London, Lund Humphries, 1977. pg.24). The amber and brown colours were obtained from iron, the green from copper, and the less common blue cobalt imported from the Near East probably in the form of glass cabochons only needing to be ground down and fritted with the lead glazing material. Tang polychrome wares disappear in the middle of the 8th century with the outbreak of the An Lushan rebellion and the associated strife. Interestingly, cobalt blue disappears from the scene until the 14th century!