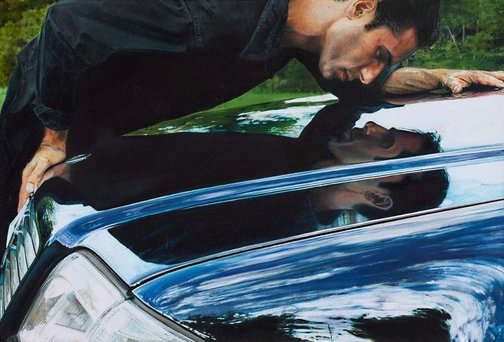 'V12 Narcissus' 2009 relates to a series of paintings Zavros made of his prized black V12 Mercedes Benz automobile. Growing up on the Gold Coast, the young artist and his father would bond over visiting local car dealerships together. For them the Mercs displayed in the window were synonymous with success; a symptom of what the artist terms as his Irish/Greek-Cypriot family's 'migrant materialism'.

The artist casts himself as a suburban Narcissus in an image which references both polished car advertisements as well as the composition of Caravaggio's baroque interpretation of the Greek myth. However, in this contemporary adaptation the figure's face is reflected in the bonnet of his Mercedes Benz as opposed to a pool of water.

In re-enacting the cautionary tale of a man whose infinite transfixion with his reflection (in a brand/product) leads to his own demise the artist contemplates the ill fate of our vain and superficial consumerist culture. Furthermore, Zavros comes to concede, even endorse, how possessions define his own identity and mediate his own personal relationships. He muses that:

"Looking at these cars and later, my drawings of them, my father and I could speak with ease and enthusiasm that extended to little else. He sought his reflection in those mirrored surfaces and I sought mine in him. And looking at the cars made me happy".

Gift of the artist 2013. Donated through the Australian Government's Cultural Gifts Program

Browse other works by Michael Zavros