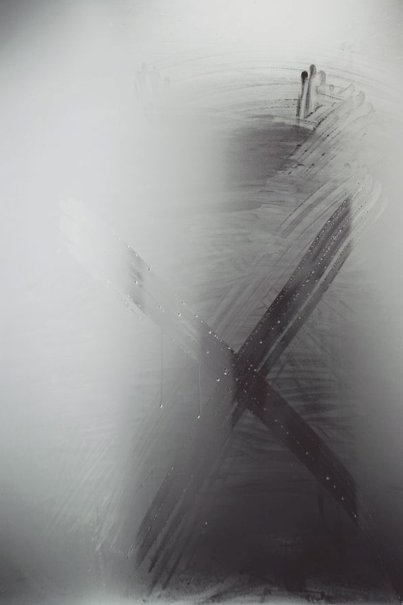 Born in 1959 in the Czech Republic, Eugenia Raskopoulos immigrated to Australia, via Greece, in 1963. She studied at Sydney College of the Arts, The University of Sydney (1977-79), completed her Masters of Fine Art at the College of Fine Arts, The University of New South Wales, in 1993 and in 2011 she completed her PhD there. She has exhibited widely in Australia and abroad since 1983.
Raskopoulos uses photography and video to explore abstract visuals and settings, concentrating on themes of language, the body and processes of transcription and translation. In her practice she has used steam, salt, oil, lipstick, and chalk as a means to smear, score and drip words into temporary formations that emphasise the fluidity of language, recording these movements and words in both still and moving image in an interdisciplinary practice which amalgamates performance, writing, drawing and installation.
In linguistics, diglossia refers to a situation in which two dialects or languages are used by a single language community. In addition to the community's everyday language, a second, highly codified variety is used in certain situations. In the work 'Diglossia #1-8', steam is the medium used to explore these dual languages. The artist has wiped steam from a mirror to form eight letters from the Greek alphabet, which are recorded in eight photographs. However, the letters do not form a discernible word and therefore cannot be translated. This fragmentation invites the viewer to question the notion of translation between languages and cultures.
The ephemeral nature of the letters – formed from steam and captured via photography before they are re-covered by steam – reinforces the notion of fluidity and temporality of language, common themes in Raskopoulos’s work.
Raskopolous frequently uses her own body in her works and she is again present in 'Diglossia #1-8', both through her gestures in forming the letters, as well as reflected in the mirrors and captured in the photographs, inviting the viewer to ‘look and reflect’ on the nature of her work. 'Diglossia #1-8' has been described as ‘a familiar topos where word and body co-exist in mutual support’.i

Browse other works by Eugenia Raskopoulos