The daughters of Sir Thomas Frankland 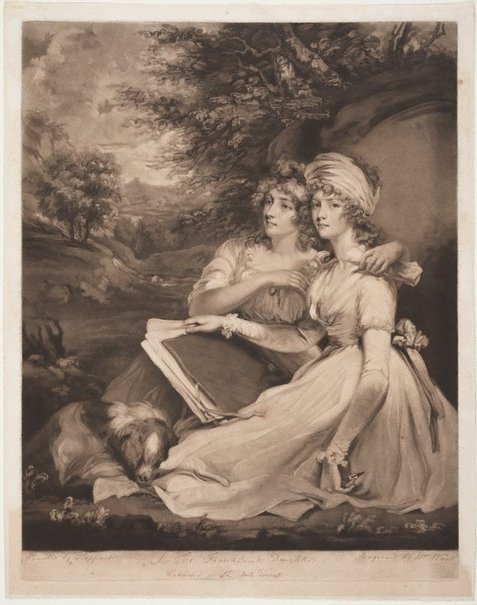 The second half of the 18th century was the great age of the English portrait mezzotint. The inauguration of this epoch of printmaking owes a great deal to the figure of Sir Joshua Reynolds, whose paintings, starting in the mid 1750s, were more frequently translated into mezzotint than those of any other painter. Reynolds’s reputation – not to mention those of the countless portrait painters who followed him – benefitted enormously from the skill of reproductive mezzotinters who, in turn, relied heavily on painters to supply them with images. The flowering of mezzotint in this period is ultimately the result of the mutually dependent relationship that developed between painter and engraver.

Some mezzotints were made at the instigation of the sitter but more often the prints were undertaken commercially and sold in print shops to a mass audience. The financial gain to publishers and engravers could be enormous, and successful engravers like William Ward were able to combine the roles of publisher and engraver and sell direct to the public.

Serious collectors attached a high premium on early, unfinished impressions of mezzotints, preferring these to impressions in the definitive published state. Because mezzotint is such a refined technique the burr wears down very quickly and the copper plate cannot withstand the repeated printing of which most other types of prints are capable of bearing. The Gallery’s impression of The daughters of Sir Thomas Frankland is a beautiful example of a proof impression with its delicate tones intact, printed before the addition of engraved lettering in the bottom margin. It is inscribed in pen and ink with the artist’s and mezzotinter’s names, title and (incomplete) publication line. The finished state includes the publisher’s address and the date of 1797.

Within the genre of portraiture, depictions of beautiful women – especially large-scale prints of society beauties in flowing dresses posed in outdoor settings – exceeded all other subjects in terms of popularity. Mezzotint was also ideally suited for the rendering of insubstantial forms such as feathery foliage and clouds, and soft textures such as hair, fabric, lace and ribbon – effects that are superbly captured in this print.

Based on John Hoppner’s oil painting of 1795 (now in the National Gallery of Art, Washington), Ward’s graceful mezzotint depicts the sisters Marianne and Amelia Frankland. Amelia looks out at the spectator; her right hand balances a portfolio of sketches on her lap and in her left hand she holds a crayon. Marianne gazes soulfully to the left, tenderly resting her arm on her sister’s shoulder. At their feet a faithful spaniel lies sleeping – a symbol of the sisters’ natural affection and love, and of their sympathy with nature. By virtue of their being posed within a wooded enclave, the girls are shown to be fashionably sentient women, completely in tune with the landscape. The depiction of natural settings in portraiture at this time was a response to the cult of Sensibility, serving to highlight the simplicity and unaffected sincerity of the sitters as well as their capacity to feel refined emotions and perceive natural beauty.

The daughters of Sir Thomas Frankland (The sisters)