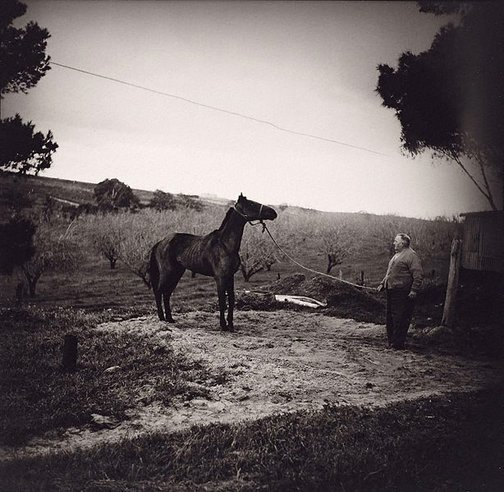 Known as a freelance photojournalist for major newspapers and magazines, theatrical photographer, writer, curator and critic for the ‘Sydney Morning Herald’ Robert McFarlane also photographs friends and family. Here he conveys an intimacy with the subject – his grandfather – who trained and raced trotters in South Australia. Taken before he left Adelaide for Sydney in 1963, the romantic image, perhaps only to urban viewers, of man and horse against a rural backdrop evokes a real relationship between people and place. There is a mutual challenge between the experienced sturdy figure and the newly acquired emaciated horse, yet there seems little doubt as to who will succumb in this personal drama. It is a static moment before inevitable action. The two figures in early morning light are standing on a small well-stamped stage – the site of previous equine auditions. Framed by darker vegetation the horizon slopes down to the right as the opposing diagonal of pale sandy soil rises up, providing another sight line towards Amos Chaplin. The diagonals form different tones of grey triangular shapes which give visual interest and assist in balancing the disparity in size of horse and man.

McFarlane recalled: ‘I was 18 when I took this picture, using a Japanese copy of the Rolleicord twin lens reflex camera – a Ricoh Diacord. This picture is living proof that I was using the camera as a divining rod with only rudimentary skills.’1

Browse other works by Robert McFarlane