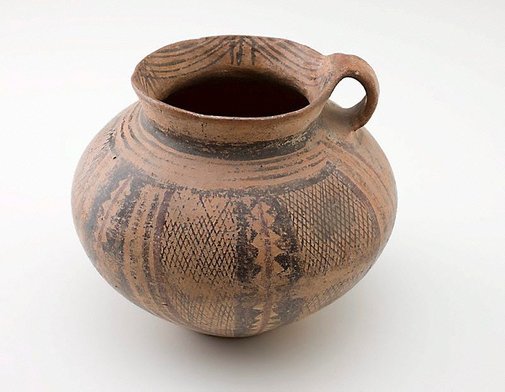 The earliest pottery of China is the unglazed earthenware of the Neolithic cultures dating from the 4th to the 2nd millennium BCE. Two Neolithic cultures have been identified in the north, the cradle of Chinese civilization: the Yangshao (of which this jar is an example) and the Longshan. The Yangshao culture is named after the village of that name in Henan province where the Swedish geologist J.G. Anderson first found evidence of its existence in 1922. The culture was centred on Henan but extended northwards into Shanxi and Shaanxi and later westwards into Gansu. The Gansu extension is now usually termed Gansu Yangshao and this jar is an example of a type of pottery found in cemeteries at Banshan in Gansu.

The jar has been hand built by the coiling method from fairly well prepared clay of comparatively fine particle size. When completed, it was allowed to dry, then the surface was lightly burnished with a hard object such as a pebble in preparation for the applied geometric designs, in black (iron) and purple (manganese). The piece was then fired at a temperature estimated to have ranged from about 800ºC to as high as 1050ºC. Most Yangshao decorated pots have geometric and linear patterns, naturalistic motifs being rare. Painted pots in fact constitute only a minority of the total number of Yangshao pots that have been found and may have been primarily intended for ritual use.

These vessels are referred to as of Pan-shan type after a cemetery at a place of that name where a large quantity was found.