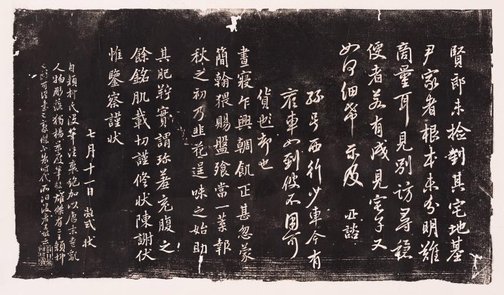 This rare set of 42 rubbings was from stelae of 'Zizhu Shanfang Lin Gu Fa Tie' – a model-letter compendia by Chen Zhao Lun (1700-1771), (alias: Xingzhai, style name: Jushan). A native of Hangzhou, Zhejiang Province, Chen was a very knowledgeable scholar-official and calligrapher in the mid-Qing dynasty. He commissioned the cutting into stones of the calligraphy of 23 most famous Chinese calligraphers from the 4th to 14th century and wrote colophons to each piece. These calligraphers include Wang Xizhi，Wang Xianzhi，Zhang Xu，Huai Su，Liu Gongquan，Ouyang Xun, Chu Suiliang, Su Shi, Mi Fu，Zhao Mengfu, and so on. There is a date at the end of the introduction written by Chen Zhaolun, indicating the original stone was carved in the 28th year of Qianlong, 1763. Judging from the cracks shown in the rubbings, the size of the rubbings and the way they were preserved and bound, this set was made in the 19th century.

Carving characters into hard substances can be traced back as early as the Neolithic era when Chinese characters were invented. These appear on pottery, oracle bones and bronzes. Rubbings using paper came much later - when Chinese had invented paper in the Eastern Han dynasty (25-220 AD). The paper-based rubbing itself was probably invented in the late 5th or early 6th century, but by the Tang dynasty in 7th century, it had became quite common.

The principal function of rubbings has been to reproduce intellectually, aesthetically or religiously valued calligraphies or images that were carved, incised or cast on hard surfaces.

Among artists and scholars in China, the primary reason for seeking important rubbing copies is the appreciation of the fine calligraphy and poetry or essays, commonly in combination. Works of important artists and scholars were copied by famous calligraphers, then carved onto stones from which rubbings were made. They were then bound and distributed among the educated elite. When the original stone was lost or broken, rubbings then served as models for new copies for fresh cuts from which fresh rubbings were made.

In modern times, rubbings while ubiquitous in China are highly sought after by collectors and connoisseurs. The study of rubbings, 'bei xue', is considered the most profound and recondite discipline in China.