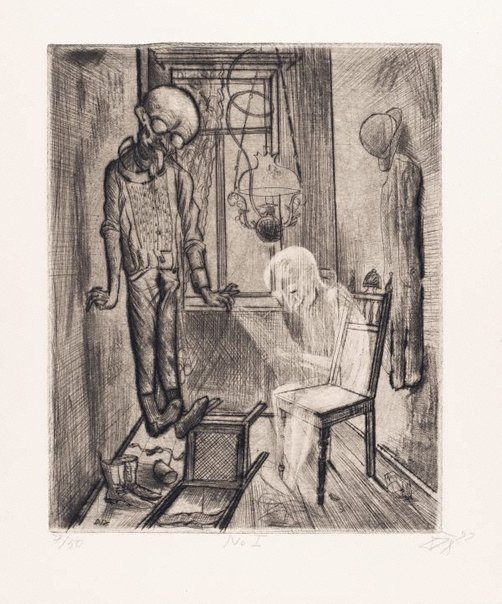 At the outbreak of World War I Dix volunteered as a machine gunner. His experience of the full horrors of trench warfare was to be of vital importance to his outlook as an artist. After the war he studied at the Academy in Dresden where he became a founder-member of the Dresden Secession, an offshoot of the radical 'Novembergruppe' in Berlin. By the early 1920s he was the leading artist of the ‘Neue Sachlichkeit' (New Objectivity), a highly personal and detailed style of social realism, reflecting the cynicism and resignation of the post-war period. At the same time Dix's interest in printmaking intensified and in 1922 he moved to Dusseldorf to study intaglio techniques with Wilhelm Heberholz, a master of the medium.

'The suicide' is the first print from the portfolio of six etchings entitled 'Tod und Auferstehung' (Death and Resurrection), published in 1922 in an edition of 50. Its origins are in the multitude of drawings Dix made at the front-line as well as the apocalyptic imagery of earlier German poetry and graphic art. Dix had read deeply in Nietzsche as a young man and the portfolio might also be influenced by the philosopher's concept of the eternal cycle of becoming, decay and renewal.

'The suicide' depicts a narrow, box-like room, sparsely furnished but for a few domestic items. The carefully observed details and elegance of the setting seem incongruous with the gravity of the event that has just taken place and contributes to the note of black humour. The dead man's spirit has left the corpse and sits dolefully on the chair beside it. Meanwhile the body hangs lifeless as the hat and coat on the wall opposite.

The suicide: the hanging man

Browse other works by Otto Dix