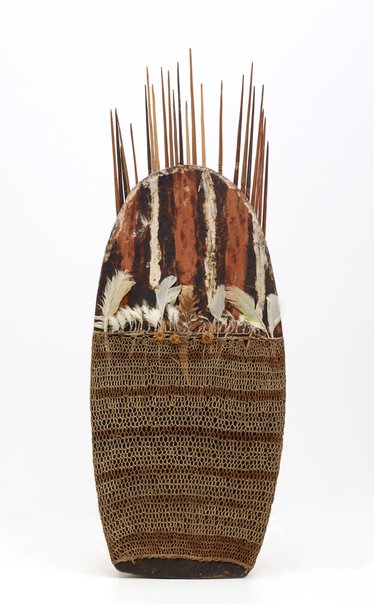 The Baruya are one of 12 Anga linguistic groups, their lands stretching through the tropical rainforest and kunai grasslands of the Wonenara and Marawaka valleys, along the eastern frontiers of the highlands and into the heart of the Kratke mountain range. Their existence was unknown to the western world until 1951, when the Australian patrol officer Jim Sinclair set out to find the people who produced the large bars of vegetal salt exchanged along traditional trade routes across the eastern highlands region as far as the coast.

Over the past two centuries, according to oral history, the Baruya (comprising five tribes) have progressively made territorial conquests, travelling from their ancestral lands near Menyamya in the south, up into the Marawaka and Wonenara valleys.(1) Through intermarriage between the Baruya and conquered groups, uneasy truces were made, however the desire to win back land or to avenge those killed in battle caused lingering resentment and intermittent war. Although there was a period of peace between 1960 – when colonial administration enforced pacification – and independence in 1975, conflict has re-emerged between longstanding adversaries.(2)

Neighbouring groups, who are the Baruya's traditional exchange partners, revere the Baruya for their ferocity in battle. In a system of interregional trade, pacts between men of other tribes are made in order to enable transactions of salt for objects and materials unavailable to the Baruya on their own land. These include certain varieties of trees from which the distinctive barkcloth capes ('yuveutta') are made; stone used to produce fine blades for adzes used for farming and construction, as well as club heads for warfare; black palm wood, used to make the best bows and arrows for hunting and combat; and, of course, prized cowrie, bailer and pearlshells for body ornaments. Warriors, together with masters of the initiations, salt makers and shamans (all considered Great Men), occupy positions of high social status in Baruya society.

As in many highlands societies, Baruya warfare was a grand spectacle, sometimes more theatrical than deadly. In conflicts between neighbouring hamlets or villages, opposing groups gathered at arrow-fire distance from one another, often separated by a natural barrier such as a river. Shouting insults from behind their shields, individuals would sporadically rush forward, shoot arrows at the enemy and then retreat quickly to safety. Meanwhile, individuals or small groups attempted surprise attacks, which were far more dangerous as the men were isolated from the main group. As soon as warriors were wounded, fighting was called off. Hostilities with unrelated outside groups consisted of surprise dawn attacks on villages by large numbers of warriors, usually in close combat using stone clubs and cassowary bone daggers.(3)

Carved from planked wood and logs sourced from the slopes of the Baruya's traditional fighting grounds, roughly hewn shields were often camouflaged with linear stripes. Their lower front and back surfaces were covered with looped string netting which held arrows.(4) The gɨlɨmihɨnya shield collected by Stan Moriarty in 1969, is painted with thick stripes in red ochre and white clay. Certain soils are used by the Baruya for pigments, with colour having both a symbolic and aesthetic function.(5) 'Gwegwaka', soft creamy clay found only at high altitudes, is used in some initiation ceremonies and as body paint in war. 'Nambuchuwaka', bright red clay from the country of the Tsimbari tribe, is used in dances and initiation ceremonies and for war paint. Vivid colours – such as 'nambuchuwaka' – ensure beauty, good health and strength. They also reaffirm the connection of the Baruya with the sun, their supernatural father whose mythical union with the moon established the cosmic order as we know it today.(6)

(4) Fetchko, pp 84–86. The Gajdusek Collection at the Peabody Essex Museum, Salem, Massachusetts holds a similar gɨlɨmihɨnyanetted shield (without arrows) collected by Dr Carleton Gajdusek in the Moraei region in 1964.

Shield and arrows with bilum bag

© Baruya people, under the endorsement of the Pacific Islands Museums Association's (PIMA) Code of Ethics