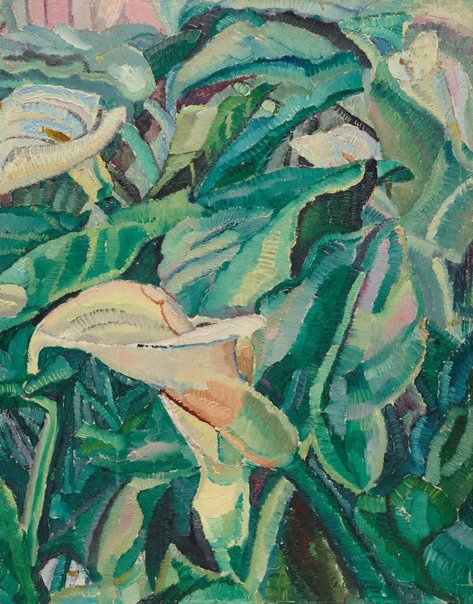 Grace Cossington Smith's art of the 1920s elaborated on the idea of the energies and vital movements of growth that underpinned the natural world. Her pulsating, colour-saturated brushwork became a primary metaphor for describing the metaphysics of a world in perpetual motion.

During this decade, Cossington Smith developed concepts concerning 'decorative' (or non-naturalistic) organisation in her art. Her paintings suggest her knowledge of the work of Matisse as well as a renewed study of the art of Gauguin. It was from the interactions between rhythmic movement and decorative form in Gauguin that Cossington Smith appears to have absorbed the principle of entirely covering the surface of the composition without a focal point.

Cossington Smith applied these aesthetic strategies to her depictions of the natural world. She painted both the minutiae and sublime expanse of the landscape, creating innovative works that suggest the dynamic, unseen sensations of organic life forms.

In 'Arums growing' c1927, Cossington Smith creates a cropped, condensed composition of criss-crossing forms of leaves and flowers. She presents a weaving of plant forms that appear as an impenetrable organic force. Cossington Smith has here elaborated on the patterned tapestry-like surface effect gleaned from the work of Gauguin. But the painting is also telling of Cossington Smith's distinct application of colour through vibrating brushwork into rhythmically abstracting forms as the methods by which she extended Gauguin's example to create a unique, modern portrayal of nature.

Lilies in a garden