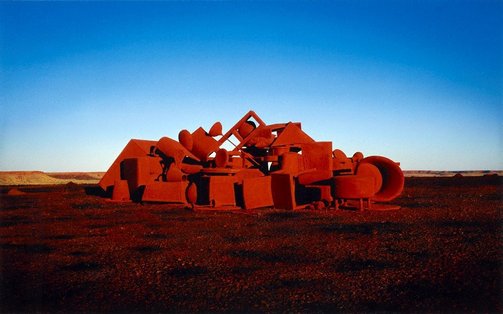 Like much of Laing's work, 'burning Ayer #1', from the series 'one dozen unnatural disasters in the Australian landscape' 2003, deals with ideas of place; our relationship with the land and our past. The series was photographed around Balgo in the north-east of Western Australia, land belonging to the Wirrimanu Aboriginal community.

Into this sparse desert landscape, Laing has introduced a mound of furniture coated in red dust and arranged in a form suggestive of Uluru, a shape easily recognisable from the multitude of images of this now popular tourist destination. However, the pile of furniture is clearly alien; it does not fit this place. Its form disrupts the panoramic view we have become accustomed to when looking at representations of such landscapes. While scenic photography denies the history of place, presenting nature as spectacle and outside of time, Laing's work has the opposite effect.

By inserting incongruous elements into the natural landscape and manipulating the conventions of scenic photography, Laing reflects the invasive impact of colonisation on the Indigenous population. She seeks to address the relationship of non-Indigenous people to this area. The furniture is of the generic modernist type, mass produced by companies such as IKEA for consumption throughout the world.

In the three subsequent works in the 'burning Ayer' series, the pile of furniture is set alight and burns to the ground. This hints at the violence that accompanied colonisation, yet it also reflects wrongs of the past being addressed over the course of time. What was known as Ayers Rock has been returned to the Anangu name of Uluru.

As Laing states of this series, 'my intention was to make the present already past, as a means to imagining a pathway to the potential and desired resolution of belonging.'1

Gift of Vicki and Geoff Ainsworth AM 2011. Donated through the Australian Government's Cultural Gifts Program 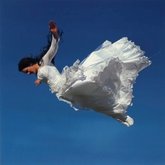