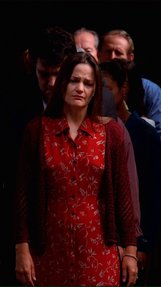 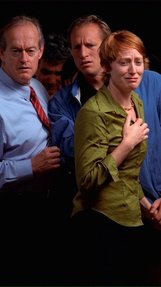 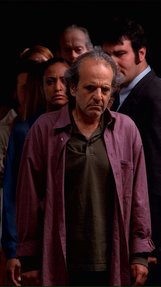 Bill Viola began experimenting with the possibilities of video as an art form early in the 1970s. He explores and manipulates the specific characteristics of his medium, such as light and linear time, by speeding up, slowing down and reversing his footage. He uses different cameras to create particular atmospheres, ranging from black-and-white surveillance footage to high-end video transferred from 35mm film.

Viola has long been interested in eastern religions and more recently in Christian iconography, in particular images that evoke our ephemeral existence on earth. ‘Observance’ is from ‘The passions’ series. In this work figures move out of the dark towards the portal of the screen, gazing beyond the frame into the viewer’s space as if into a tomb and then with a melancholy air they move away. ‘Six heads’ explores a range of human passions while in ‘Bodies of light' a male and a female stand in water while a globe of light moves up and down their bodies, eventually dissolving their forms.

Browse other works by Bill Viola