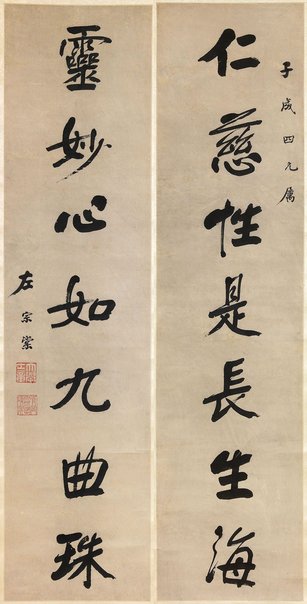 ‘A merciful nature is the source of longevity;
The wise mind resembles the complexity of a pearl shell’s twists.’
Inscription and signature: Written for Zicheng as he requested. Zuo Zongtang.

A native of Xiangyin, Hunan province, Zuo Zongtang (alias Jigao, style name Pucun) was an eminent figure of 19th-century China. His fame as a military leader and statesman almost overwhelmed his achievements in calligraphy. He studied geography and military strategy in his youth, and received the ‘juren’ degree in 1832. Recognition of his talent by Zeng Guofan (elder brother of Zeng Guoquan), one of the most important military leaders in modern history, and Emperor Xianfeng (r 1851–1861), initiated his long military career. As the left hand of Zeng, he served the Qing regime for some 30 years, suppressing various rebellions including the Taiping uprising (1).

In spite of his arduous duties, Zuo Zongtang was a renowned calligrapher, even during his own times. Although his best-known calligraphy is ‘xiaozhuan’ (lesser seal script), a style developed during the Qin dynasty (221–206 BCE), his skill in ‘xingshu’ (running script), is excellent too, as demonstrated in this couplet. The derivation of his style from ‘xiaozhuan’ is observable. As one can see, here the smooth and regular manner of the seal script has been merged into the elegance of the running script style.

Although the couplet is undated, on the basis of a seal on the work it is tenable that it was done during the last decade of his life. The characters contained in this seal, ‘Qinggong taibao’ refer to an honourable title, Grand Guardian of the Heir Apparent, that was bestowed on him by the imperial house after Zuo Zongtang recaptured the city Hangzhou from the Taiping rebels in 1864.