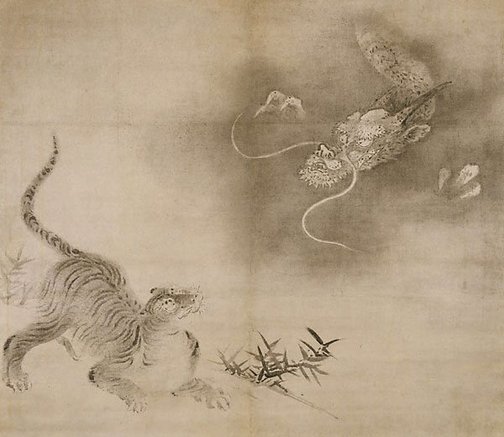 In 13th century Japan, with the development of Zen-Buddhist art, a new symbolic meaning was attributed to the dragon representing the soaring spirit of the freed satoric (or suddenly enlightened) soul. The dragon is often accompanied by a tiger, which is associated with the earthbound enlightened mind. Paintings of dragons swirling in the sky among clouds and tigers in a bamboo grove, were highly popular decorations in Zen Temples in the formats of hanging scrolls, sliding doors and folding screen.

The dragon and tiger motif eventually spread from Zen circles into the secular world and especially appealed to the ruling samurai class in the 15th to 10th centuries, since both animals symbolised power, courage and authority.

This dynamic depiction of the dragon and tiger is attributed to Kano Takanobu and was originally pasted on a sliding door in the palace of a samurai warlord. Dragons in Japanese art are usually depicted with three claws, in contrast to the five or four claws usually found on Chinese ones.