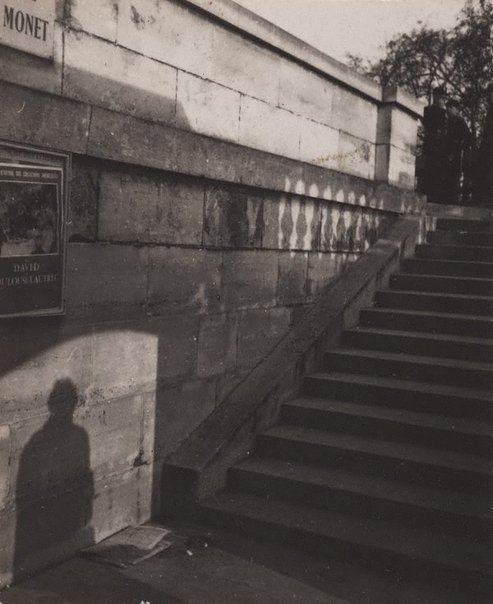 Lucien Hervé is recognized as one of the most important architectural photographers of the 20th century. His work was critical to the representation and dissemination of modernist architecture. He was Le Corbusier’s official photographer from 1949 until the architect’s death in 1965 and also worked with other celebrated architects including Oscar Niemeyer and Alvar Aalto. Not all of his photographs, however, take architecture as their subject. Aligning himself with the French post-war humanist photographers Robert Doisneau and Willy Ronis, Hervé also photographed people and streetscapes in Paris.

Whether he worked with people or architecture, Hervé’s use of oblique framing, high contrast and tilted camera angles produced photographs that flirt with abstraction. Their exact and geometric composition is articulated through the interplay between light and shadow.

‘Paris 1948’ was taken the year before Hervé met Le Corbusier. Taken from the bottom of an outdoor stone staircase, it depicts an unassuming yet complex street scene. The shadow cast over the stone wall is intercut with a patch of sunlight that reveals the silhouette of an unknown figure. A discarded newspaper lies at the bottom of the stairs while three men linger at the top. Reducing his primary human subject to a shadowed outline, a technique he used repeatedly, Hervé asserts his preoccupation with line and form. That this figure is positioned in the corner of the frame makes the space of the image appear shallow despite the receding line of the staircase.

This small photograph is a contact print, an image format that was critical to Hervé’s artistic practice. While working with Le Corbusier, Hervé would photograph one building from multiple vantage points and produce contact sheets of the small prints. Individually, the images showed small abstract details but arranged together they simulated the experience of moving through the space like a sequence of montaged film stills. Such contact prints allowed Hervé to extend his investigation of composition beyond the frame of the image.