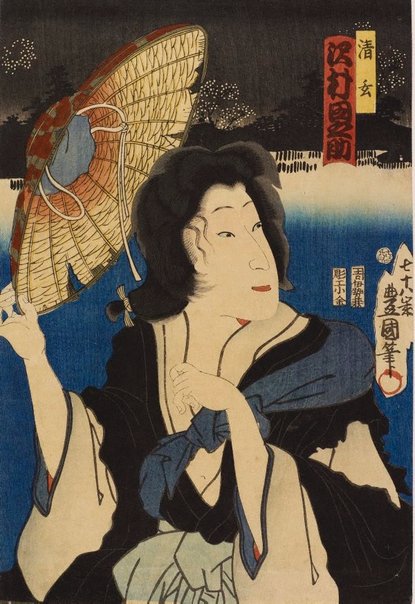 Print designers often reprised popular designs in order to keep up with demand. It is estimated that Kunisada’s studio produced 15 000 designs comprising 25 000 individual sheets, making him a staggeringly prolific designer. This print, depicting the actor Sawamura Tanosuke III (1845–78) in the role of the nun Seigen, is a reworking of an earlier design from 1852. It can be surmised from other published prints depicting Sawamura Tanosuke III in the same role that the play referred to here is 'Shirokurenai sakura no goshozome', which was performed at the Nakamura theatre in Edo in the third month of 1863. As is typical of other representations, the nun Seigen is portrayed with a tattered black outer robe and a straw hat.

Actor Sawamura Tanosuke in the role of Seigen Ama