The great breath; a book of seven designs 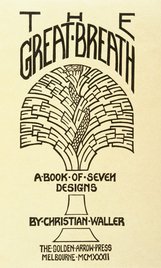 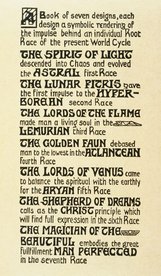 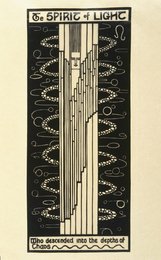 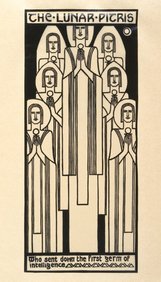 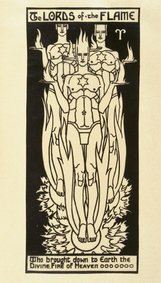 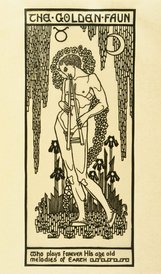 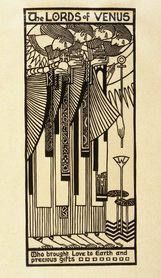 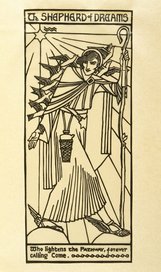 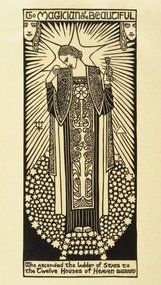 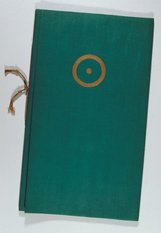 Christian Waller (née Yandell) was born at Castlemaine in 1894. Her family moved to Bendigo in 1908, and the following year at the age of fourteen she had an oil painting exhibited at the Bendigo Art Gallery. In 1910 she enrolled in the drawing class at the National Gallery School, Melbourne under Frederick McCubbin, and in 1912 in the painting school under Bernard Hall. She met her husband Napier Waller while a student; they married in 1915. She is best known as a book and magazine illustrator, printmaker and stained glass designer; her relief prints were principally made in the 1920s.

In 1929 the Wallers made a trip to Europe. Shortly after their return to Melbourne in 1930, they befriended Tatlock Miller, who owned a bookshop in Geelong; in the next few years he assisted with the production of a number of Christian Waller's books and prints; she contributed to the initial editions of his literary and artistic magazine Manuscripts (published from November 1931). Miller established the Golden Arrow Press, the first release of which was The great breath, published in April 1932, priced at £3.3.0 each.

The production of 'The great breath' was entirely undertaken by Waller; all aspects from the cutting and printing of the linoblocks to the manufacture of the distinctive gold-painted emerald green cover was done by hand. She printed the blocks on her 1849 hand-press in her studio at Ivanhoe, each book taking about four days to make, hand-bound with green cord. Although it was intended to produce an edition of 150, it seems only about 30 were made, with some unbound impressions extant, usually untrimmed. Each consisted of a title page, colophon, contents page and seven linocut designs. The images were printed in solid black on white translucent tracing paper, trimmed and tipped onto the cream pages. The books were not numbered sequentially, but rather in relation to the numerology of the buyer - the Gallery's copy was a gift of Klytie Pate, Waller's niece.

Christian Waller was a Theosophist, beliefs which inform 'The great breath'; in particular the Golden Dawn Movement. The central theme of the book is the evolution of the human race, based on the writings of Madame Blavatsky, the founder of the Theosophist movement, in particular her book 'The secret doctrine' (1888-97); the introduction stated 'A book of seven designs, each design a symbolic rendering of the impulse behind an individual Root Race of the present world cycle'. The designs draw upon ancient Egyptian and Greek imagery, and symbolism from a number of sources including the Zodiac, as well as art deco and modernist design. 'The lords of the flame' is the third image in the book; 'The lords of the flame made man a living soul in the Lemurian third race'.

Two pencil studies for The lords of the flame are in the National Gallery of Australia, with other studies for the book. There is a second copy of the book in the Gallery library (number 43). The engraved linoblock is in the collection of the Castlemaine Art Gallery. In 1978 Gryphon Books published a facsimile edition in slightly smaller format, limited to 600 copies, signed by Klytie Pate.

Christian Waller
The great breath; a book of seven designs

Browse other works by Christian Waller