Vase with various designs in panels of different shapes 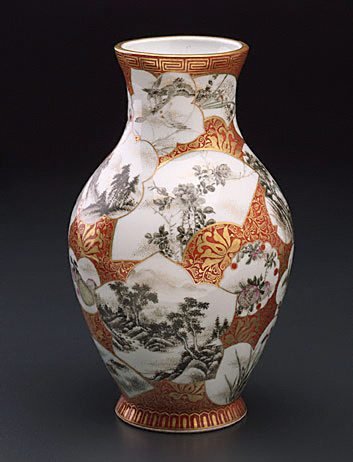 Ko-Kutani (Old Kutani) wares, a distinct category of 17th century Japanese porcelain, are easily recognisable by their bold use of strong, dark enamels. They were initially thought to have been produced in kilns in the old Kaga region (present-day Ishikawa prefecture). Current thinking however is that 'Ko-Kutani' should be used as a stylistic rather than geographic descriptor, and that the wares were produced at Arita. Regardless of where the kilns were, Ko-Kutani wares seem only to have been made in the mid 1600s. The style was revived in the 1800s and was referred to as 'Kutani' to distinguish it from the earlier pieces. With their distinctive gilt-on-red backgrounds, Kutani style wares were developed and exported in huge quantities to the West.

In the mid-nineteenth century, Japan signed a number of foreign trade treaties that placed the country in a somewhat disadvantaged economic position. To support the renegotiation of these treaties the new Meiji government moved to strengthen the country’s economic position by modernising industry and in the process also encouraged craft producers to become aware of Western market potential and trends (1). In the ceramics industry this necessitated knowledge of foreign technical advances and tastes to enable Japanese potters to manufacture a competitive product. The resulting innovations in the later nineteenth century proved very successful and stimulated positive change in pottery studios.

International recognition was achieved through participation in overseas expositions, where Japanese potters won prizes such as Makuzu (Miyagawa) Kōzan (1842-1916) in Paris in 1889 and Chicago in 1893 (2). Participation in exhibitions also created opportunities for progressive ceramic artists to be represented in overseas collections through diplomatic gifts. Kanzan Denshichi's Vase with various designs in panels (p. 245), for example, was presented to the art Gallery of New South Wales by the Japanese Commissioners attending the 1879 Sydney International Exhibitions (3). This piece was made around the time that Kanzan had begun experimenting with new techniques of porcelain decoration, and 'Vase, with various designs' is in the distinct gilt-on-red style of Kutani wares that were exported in quantity to the West (3).

Signed base, in Japanese, underglaze blue [inscribed] "Dai-nihon Kanzan sei [made by Kanzan from great Japan]". Not dated.

Gift of the Japanese Commissioners at the International Exhibition 1889