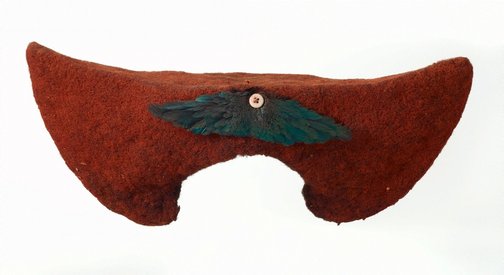 The 'hāroli' cult among the Huli of the southern highlands was an important but optional part of male initiation. When young men reached the age of 20 to 22 they could decide to join the celibate 'hāroli' cult for two to three years, to enable them to develop to physical maturity and prepare for marriage. Firm muscles, a full beard and healthy hair could be achieved through periods of seclusion in the bush, self-discipline, the study of mythology and lore, performing 'gāmu' (magic chants) and the keeping of the 'ìba gìya', a magically potent plant.

When 'hāroli' initiates finally appeared in public, they wore crescent-shaped wigs known as 'mánda', which were made from their own hair and coloured with 'hare' (red clay). The 'mánda hare' is typically decorated at the front with the crest of a Superb Bird of Paradise, and adorned with Raggiana Bird of Paradise plumes, parrot and other bird feathers.

© Huli people, under the endorsement of the Pacific Islands Museums Association's (PIMA) Code of Ethics