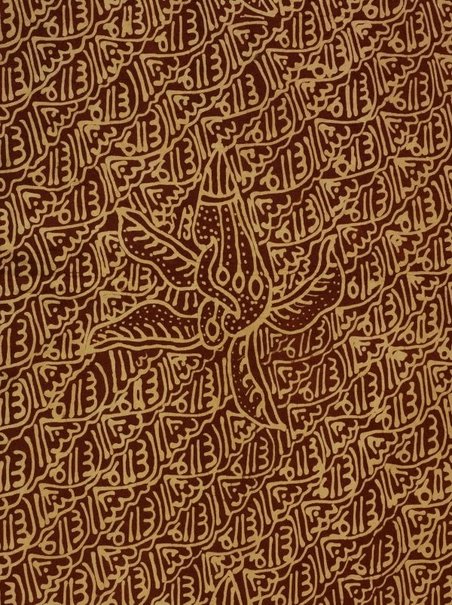 Whilst many of the motifs of Islamic textiles in Indonesia remain consistent with those more globally their meanings and methods of production are deeply imbedded in local custom. When Islam was first adopted in Indonesia it was quickly incorporated into existing religious and cultural practises, likewise those pre-existing cultural forms were employed to express Islamic thought. So, where Islamic calligraphy appears in textile design its significance can often be two fold. The text may for instance present an Islamic prayer and also appeal to local belief in the protective nature of talismanic cloths. The diagonal pattern on this textile, for example, is made by the repetition of a series of numbers which were probably believed to have talismanic significance. Aside from ‘batik cap’ (stamped batik) Southeast Asia women continued to be the major producers of textiles in the 20th century. The women who made such textiles were quite often illiterate and so the calligraphy, whilst resembling Arabic lettering was often nonsensical and was used to constitute pattern rather than prayer. The court of Cirebon was one exception and was known for employing literate Muslim men to do work involving the writing of Islamic texts. The large flower like motif, which maybe a banana flower appears in two directions whilst the calligraphy follows a single direction,
repeated to form diagonal pattern across the entirety of the cloth.