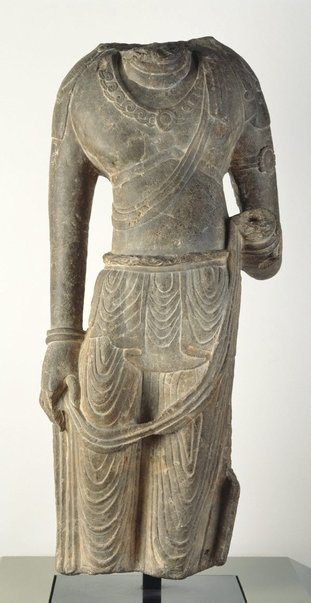 A Bodhisattva is one who has achieved enlightenment but who chooses to stay on this earth to bring salvation to suffering mankind. Bodhisattvas, usually bejewelled, are seen alone, or flanking a Buddha figure.

This figure stands in the classic 'tribhanga' (triple bend) pose, the upper front part of his body naked except for the scarf and jewels around his neck, the lower half covered by a dhoti that clings to the thighs in concentric ridges. The right hand holds part of his scarf while the left, raised, is broken at the wrist. Like many of these figures, this one has not survived intact, and his head and feet are also missing. A distinctive feature of this Bodhisattva is the carved curls of hair on the shoulders. While the naturalism of this figure is derived from Indian influences, never in Chinese sculpture does one see anything of the unbridled sensuality typical of much Indian sculpture. With both the Buddhist writings and images, the Chinese interpreted them in their own cultural terms. (When Buddhism first came to China and was being translated into terms the Chinese could understand, the key Daoist term 'dao', "the Way", was sometimes used to render the Buddhist term 'dharma', "the teaching" [A. F. Wright, 'Buddhism in Chinese History', Stanford University Press, 1959. p36]).

For the first 200 years of the Tang dynasty Buddhism flourished as never before. It was imperial policy to patronize Buddhist establishments and clergy and to build and support temples in the capital and provinces. Buddhist temples and monasteries were tax-exempt and soon acquired great wealth. Buddhist ritual was an integral part of state and imperial observances. Most of the larger pieces that survive from this period are in stone or clay, wood having been destroyed in time and bronze figures melted down. The rebellion of An Lushan from 755-763 weakened the Tang Empire. The suppression of Buddhism between 842 and 845 brought empire-wide destruction of temples, and icons. This destruction, together with the increasing influence of the Chan (Zen) sect which paid little attention to statuary, and the revival of Confucianism, marked the end of Buddhism's influence among the literate.