Self portrait as Christina Onassis 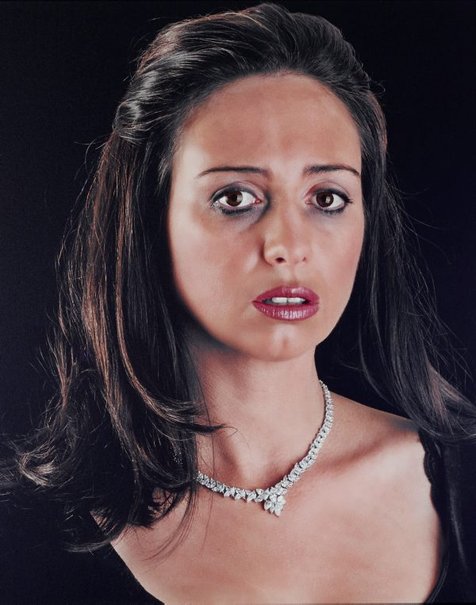 New Zealand photographer Yvonne Todd dramatizes the artifice of the commercial ideal by appropriating the aesthetic conventions of advertising and product photography. Her studio portraits of heavily made-up young women — with their wigs, staged poses and gaudy dated costumes — are character studies of amplified and embellished femininity. The impassive vacant stares of the women in these shots betray the fragility that hides behind their highly stylized appearance.

In ‘Self portrait as Christina Onassis’, the vacant stare belongs to the artist herself. Todd is in character, disguised as Jackie Onassis’ stepdaughter Christina. Borrowing this identity, Todd inserts herself into the wealthy heiress’ personal tragedies. Addicted to amphetamines and struggling with body image, Christina Onassis died of a heart attack when she was 37. As she embodies Christina’s narrative, absorbed into an ‘historical bit part’,1 Todd masks her own identity. The fake tan, dyed hair and brown contact lenses are forms of camouflage.

This photograph is a play of pure surface. Hiding behind her adopted persona, Todd’s face and body become a veneered façade. Her bronzed skin, its smoothness digitally exaggerated, has the texture of a waxwork figure. Set against a featureless black background, Todd’s Christina floats in space. She is disconnected from the real world, plucked from her historical context and embedded within an indeterminate studio setting. In this depthless image space, she seems drained of life. Her deadpan stare and locked jaw convey a haunting stillness. The division between animate and inanimate form collapses as Todd’s body becomes an object.

As with all of Todd’s portraiture, there is an unsettling awkwardness that permeates the image. Her make-up is slightly smudged while her mouth hangs open. This awkwardness is exaggerated by the photograph’s scale: she appears marginally smaller than life-size, lending the image an uncanny sensibility. In Todd’s work, as Justin Clemens remarks, ‘the gleam of the synthetic reigns over all.’2 With its waxy — almost plastic — pallor, Todd’s self portrait resembles a death mask. It memorializes the tragic (and largely forgotten) life of Christina Onassis, and the artist herself.

Purchased with funds provided by the Photography Collection Benefactors' Program 2013

Browse other works by Yvonne Todd