Study for 'The face' 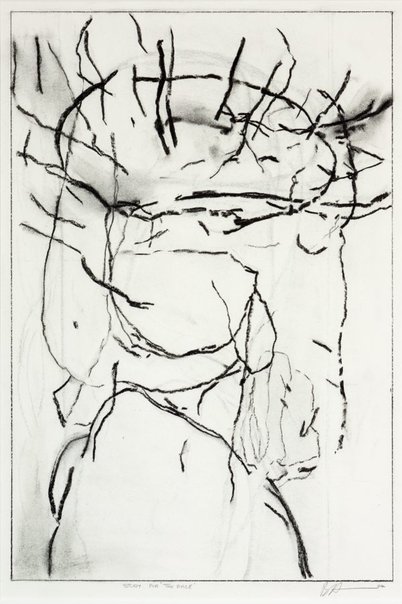 Throughout his career Brent Harris's work has explored the potency and weight of Christian iconography, which has been created by artists for over two millennia, and shaped the beliefs and customs of western society. Harris's enterprise it is not 'a question of faith' but rather a consideration of how meaning is generated through religious art. It can be traced back to his landmark series 'The stations' 1989 which addressed life and death through opening a dialogue with the spiritually engaged abstract work of fellow New Zealander Colin McCahon and American Barnett Newman.

In late 2002 Harris travelled to Europe and spent six weeks enthralled by the religious art in Paris and Florence. He was particularly taken by Michelangelo's portrayal of the lifeless Jesus Christ being cradled by the Virgin Mary and Mary Magdalene in his pietà 'The disposition' 1547-1553. It struck a chord with Harris, who had previously envisioned the mother/ son relationship in his 'Grotesquerie' series 2001, and in response he began creating his own images of Jesus and Mary in between 2004 and 2006. Harris's representations of Jesus alternated between miraculous saviour and suffering martyr; the former playfully camp with long wavy brown hair and the latter solemnly forlorn with a crown of thorns. Viewed together we can decode these constructs in order to reveal their communicative power and resonance with the human condition.

Donated through the Australian Government's Cultural Gifts Program by Gary Singer and Geoffrey Smith, in memory of Professor George Singer 2015

Brent Harris
Study for 'The face'