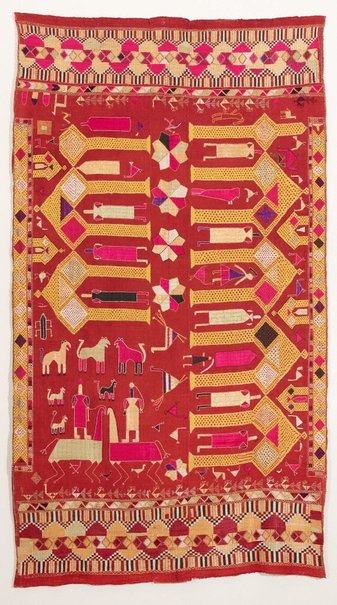 A woman and other elderly relatives in Hindu and Sikh families in the Punjab and northern India would begin work on a shawl, or head cover, such as these at the birth of a grand daughter. It would form part of the girl’s dowry and be worn by her during the wedding ceremony. The richer the family, the more 'phulkaris' there were. 'Phulkaris' were usually made within the Sikh community, though other communities in the Punjab occasionally made them.

Shawls of this type appeared in the second half of the 19th century when vividly-coloured European-made silk floss came on to the market. They are referred to as 'phulkari' or 'phulkari bagh' (‘flower’ or ‘garden of flowers’). Though some of their motifs may relate to flowers, the achievement of the embroiderers lies in how they play with abstracted and geometric shapes and in how they use the repetition of the simple long stitch to catch the light and further enhance the shapes and colours.

Known in Punjabi as ‘Sainchi phulkaris’, figurative embroideries such as this were highly prized. In India, no other regional tradition is as rich in its everyday detail as it is in 'phulkaris' like this example.