Since the mid-1990s, the primary subject of Robert Boynes's paintings have been figures in urban environments. However, in 'Blind leading the blind' 2015 Boynes has returned to addressing political themes in his work. Depicted across three panels is an inverted procession of blindfolded men and women who are presumably the victims of war - surreal scenes that we have become accustomed to in our 24-hour news cycle. In referencing this material Boynes draws attention to our exposure and disposition to such imagery, which he believes has been 'seared into our brains and memory so clearly that we become dumb to their existence' [1]. These images have been screen-printed onto a primed, scrunched canvas, which has later been hosed down with water by the artist. Its textured surface undermines any sense of realism or distinction between the truth of the events and what we perceive via media representation. The title 'Blind leading the blind' is a reference to the plight of the subjects, but also to the collective ignorance of people who knowingly and unknowingly 'turn a blind eye' to reality.

Browse other works by Robert Boynes 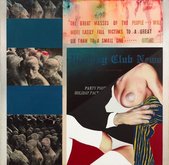 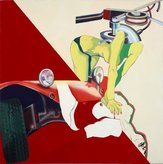 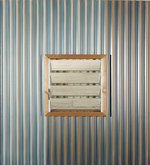