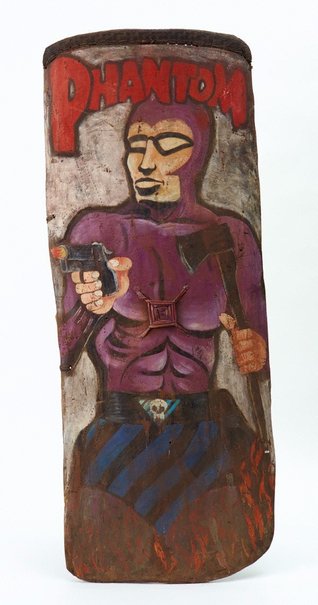 For thousands of years the highlanders of New Guinea have settled disputes through tribal warfare. It is likely, however, that the introduction of sweet potato into the diet around 400 years ago, significantly increased population among the highland peoples, and thereby put pressure on land and hunting resources, escalating conflict.

Shields were a vital element of warfare, protecting its bearer from attack from arrows, stone-headed clubs and axes, and spears. Across the Highlands, shields took on many forms, according to their intended use.

This shield from the Wahgi Valley of the western region of the Highlands, has the traditional form of the full-sized war shields - 'kumbe reipe' - used by warriors of Mt Hagen. However, instead of the traditional punctated design over painted with charcoal black, and white, red, yellow, and blue earth colours, this shield displays a vivid rendering of the celebrated comic book hero of the 1930s, The Phantom.

During the 1980s, when warfare re-emerged after a period of relative amity in the Highlands, young men, who were now able to read and write, used words for the first time on shield designs: football teams, beer and soft-drink logos and other symbols from the outside world. The Phantom motif became popular, with his creed of 'the man who cannot die' resonating with warriors, relying not on supernatural powers, but their strength, intelligence and fearsome reputations to defeat their foes.

© Wahgi people, under the endorsement of PIMA's 'Code of Ethics'