Pages from a Qur'an 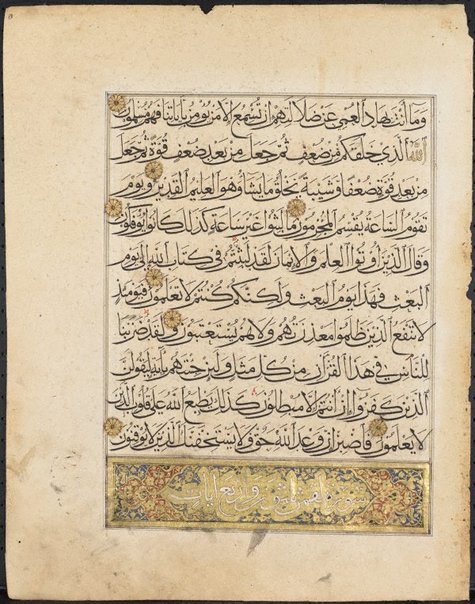 Arabic calligraphy is the primary form of visual expression in the Islamic context and the writing or copying of the Qur’an provides the perfect context. The verses from this Mamluk Qur’an are written in the 'muhaqqaq' script and is read from right to left.

The scholar of Islamic art, Anthony Welsh writes that:
'the Arabic script at its best can be a flowing continuum of ascending verticals, descending curves, and temperate horizontals, achieving a measured balance between, static perfection of individual form and paced and rhythmic movement. There is great variability in form: words and letters can be compacted to a dense knot or drawn out to great length; they can be angular or curving; they can be small or large. The range of possibilities is almost infinite, and the scribes of Islam labored with passion to unfold the promise of the script.'

Treatises and manuals emphasise beauty, proportion and geometry as the measure of good calligraphy in a context where beautiful handwriting is described as the perfection of man.

The verses from these two leaves from a Qur’an are separated by gold rosettes decorated with red and blue dots. The decorated banner at the bottom of the first leaf is known as a surah and marks the beginning of a new chapter. In this case the banner marks Surah XLIII, 'The Moon Verses' and is written in 'thuluth' script.'

Pages from a Qur'an