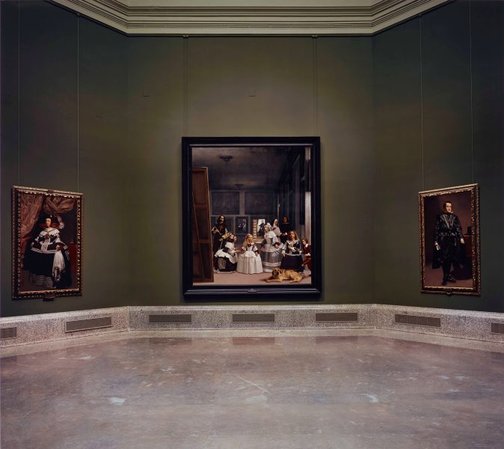 In this meditation on Diego Velázquez and the 17th century Spanish artist’s compelling 1656 painting 'Las meninas' at the Prado, Madrid, Morimura has reworked the image, enhancing the mysteries and creating a possible narrative of appearance and disappearance. Morimura is also intrigued by the painter’s interest in those outside the mainstream of society as much as those who patronised him. Morimura was allowed to photograph at night in the Prado and, as is usual in his work, played ever figure. However, this is the first time Morimura has used an actual location rather than a recreation, and the first time he has appeared as himself looking at a work of art. The title "Las meninas reborn in the night' plays on the notion that objects in a museum may come alive after the vistors have left.

'Las meninas' is one of the most analysed paintings in the history of art. Who is looking at who and who is a reflection or representation remains tantalisingly unresolved. It is a painting that Morimura had long considered as one he wished to ‘inhabit’ because of its status and complexity. The subsequent suite of eight photographs begins and ends in the Velázquez room at the Prado.

In-between Morimura is seen looking at the famous painting and it appears the two artists look at each other. Morimura as Velázquez then moves out of the painting toward us. This is followed by two scenes of the artists at work, they and their subjects mirroring each other; there is a reversal, then another, then the paintings on the wall have all become inhabited by Morimuras. At the last the figures have gone. 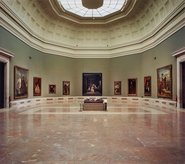 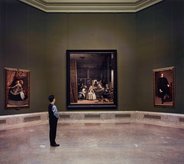 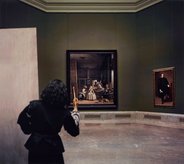 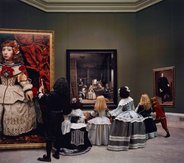 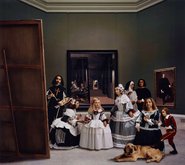 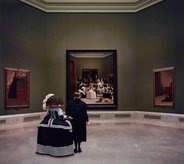