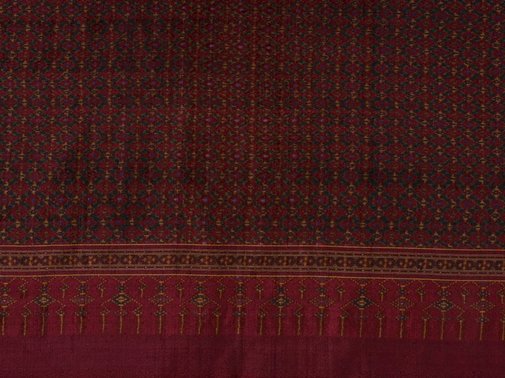 Textiles were important in Cambodia from an early date. Many stone sculptures from the Angkor period (c 800 to 1435) display meticulously detailed textiles. These include items of clothing and cloth for other purposes, such as wall hangings, curtains, and fans. After the Khmer period, textiles continued to be produced for personal use, for sale, and as donations to Buddhist monasteries and monks as acts of merit. Silk and cotton are the two main fibres employed in textile production, although other plant fibres were also used. During the nineteenth century weavers dyed their yarns with natural materials, some of which continue to be part of textile production today.

Lengths of cloth like these are sampots (hipcloths). They are worn either as tube-skirts or as 'sampot chawng kbun', when the cloth is wrapped around the waist, bundled at the front, passed between the legs, and tied at the back to form a trouser shape. Sampots are also distinguished by methods of production.

For example, 'sampot sarabaps' (eg 251.2003), were worn at formal court events and weddings, as well as by Khmer dancers during performances. They are silk textiles decorated with metal-wrapped threads added during weaving.

'Sampot rbauk' is also a silk textile (eg 230.2003), but it has been embellished during the weaving process with supplementary silk yarns, rather than metal-wrapped threads. These "extra" silk yarns decorate the entire textile, rather than just a section.

'Ikat' is another popular method of decorating fabrics. This technique involves dyeing the pattern into the yarns before weaving starts, and as a result, the pattern has a fuzzy appearance (eg 231.2003).